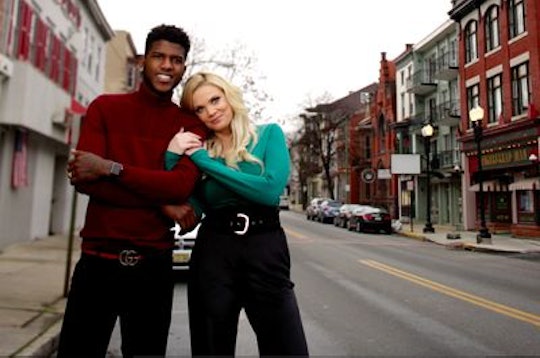 Ashley & Jay Definitely Had Their Ups & Downs On '90 Day Fiance'

TLC's 90 Day Fiancé franchise takes fans on some of the wildest rides in reality TV history. Honestly, even if you watch the show religiously like I do, some of the couples' journeys are hard to follow. There are obviously at least a few months between a show filming and airing, so a couple's status can change in an instant, no matter what you're watching. Right now the question on most fans' minds is — are Ashley and Jay together after 90 Day Fiancé: Happily Ever After? Their's is definitely one of the most stressful relationships to watch.

Perhaps it doesn't surprise you that the couple has officially split. Ashley is quick to throw Jay out of cars and file papers. Us Weekly reported on Apr. 25 that Ashley filed for divorce from Jay just one week before Happily Ever After premiered on TLC Apr. 28. This isn't the first time she's done it, either. She also filed divorce papers on Jan. 11 of this year and withdrew the papers nine days later. At the time, she broke her NDA to set the record straight, claiming she had never actually split from her husband. "I’m breaking the NDA and surprise: Jay and I have never separated since the day we were married,” Us Weekly reported her Feb. 10 Instagram story reading. “Breaking the NDA means I won’t be paid a dime for future shows. We were made to act as if our relationship was no longer active.”

I bet she regrets breaking that NDA because Us Weekly also thinks Ashley and Jay will be a part of future spinoffs in the franchise, and like I said, this time the breakup is real. On Apr. 26 the website spoke to Ashley at an event, where she told them she was dating again. “I’m really happy right now,” she said. “It’s nothing serious. [I] have found someone.”

I'm happy for her. Fans of the show know that Ashley has been dealing with Jay talking to other women since just three days after they were married. This official split is allegedly a result of another cheating incident, but Ashley is on a good path. "I’m in a much better place right now and surrounding myself with someone who’s honest and treats me well," she told Us Weekly at the event where she was celebrating her birthday with fellow reality TV star Farrah Abraham at Playboy Club NYC.

Ashley has been engaged a couple of times before Jay, but never made it down the aisle. She knew Jay just eight days before saying yes to his proposal. Hopefully, she slows down and takes some time for self-care and reflection. A post on her Instagram on April 24 proves she knows her worth, she just has to keep showing it. "Behind every Strong woman lies a broken little girl who had to learn to get back up, fix the the broken pieces, and never depend on anyone," reads the caption of a BTS pic.

As for Jay's response, he's deleted many of his Instagram posts, but E! News reported that one such deleted post read, "I may have hurt you. I may have not been a good husband. Jumping on a plane the second I found out you was in the hospital was something I didn't even think twice to do. We have our differences but as long as I have life I will never let you sit alone and suffer. I love you and nothing will ever change that. Thank you for having me here to support you."

Ashley and Jay definitely had feelings for each other. They dealt with people questioning their relationship because of its length and their age and race difference wonderfully. It's unfortunate cheating is what broke them, but I wish them well.