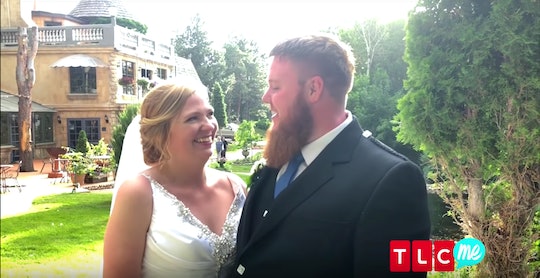 Sister Wives returned to TLC on Jan. 20 and one of the highlights teased in the trailer this season was Aspyn and Mitch's engagement. So fans of the show might be wondering: are Aspyn and Mitch married already? In fact, the pair tied the knot on June 17, 2018, People exclusively confirmed.

The family returned to Utah for the ceremony and reception, which hosted a whopping 400 people. (The ceremony was a bit more intimate with just 120 guests.) Aspyn and Mitch got married at La Caille restaurant in Sandy, Utah and the outdoor ceremony featured a view of the mountains as its backdrop. Mitch, a carpenter, built the arch that the couple exchanged vows under, according to Us Magazine, and his ten nieces served as flower girls in the wedding. The couple decided to forego having a full wedding party, but Aspyn's younger sister Truely stood up as a page and her sister Ariella joined the squad of flower girls.

In a nod to Mitch's Scottish background, both he and the Brown family patriarch wore traditional kilts, while Mitch's mom made fascinators for the Brown sister wives. Aspyn's bouquet was wrapped in the same tartan cloth as Mitch's kilt, and they also used the same fabric for a Celtic hand-fasting ritual as part of the ceremony. "I really liked the hand-fasting ceremony that [officiant] Nathan put on for us," he said in a clip of the couple at the wedding. "I've got Scottish heritage, so it means a lot to me." Of course, the couple also honeymooned in Scotland for a very on-theme conclusion to the festivities.

For both the ceremony and the reception, Aspyn wore a satin and beaded Alfred Angelo dress, according to People. The daughter of Kody Brown and his third wife Christine, Aspyn first met Mitch at a family party. The Brown clan was clearly overjoyed when they announced their engagement, as you can see in the Season 13 trailer below.

"We are very excited to have Mitch be in our family," Christine gushed.

Her husband joked, "Well, it's about time."

The trailer also teases some info on the kind of family Aspyn and Mitch plan on having. "I would never force her to become a polygamist," Mitch says in a joint interview featuring the couple, adding, "I don't know that I would necessarily go out and seek other women."

In addition to the wedding, this season also centers some tribulations for the Brown family. After fleeing Utah under threat of criminal prosecution for breaking the state's strict anti-bigamy laws, the Browns moved to Las Vegas. But it quickly became clear that the sweltering desert heat and city lifestyle didn't suit the outdoorsy family either. This season gives viewers a glimpse into their move to Arizona.

"The main reason to leave Las Vegas is because we were never really city people," Kody said in an interview with Us ahead of the Season 13 premiere. "We essentially chose Flagstaff for more of a family friendly and rustic lifestyle. The place is beautiful."