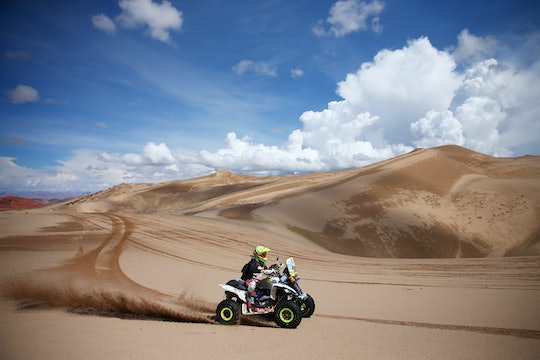 ATVs Might Not Be Safe For Kids Under 16 Years Old

This past weekend, actress and singer Jamie Lynn Spears' young daughter, Maddie, was involved in a terrifying ATV accident that left the 8-year-old girl in critical condition. Maddie is reported to be slowly improving, as aunt and famed singer-songwriter Britney Spears told fans Wednesday that Maddie was "making progress." Maddie's shocking accident, however, also brings up an incredibly important discussion for parents everywhere who were stunned by the news, and who also enjoy outdoor activities with their children — ATV safety. Surely, those parents are now wondering whether ATVs are safe for kids — and they're probably looking for answers.

ATVs are understandably appealing to kids — they're faster than a bike, offer entertainment for those thrill-seeking kids who love adventure, and don't require a driver's license to operate, according to Kid's Health. However, some doctors warn that it may be best for kids to stay off ATVs until they've reached a certain age.

According to ABC News, "Both the academy of Pediatrics and the American College of Surgeons recommend keeping all children under the age of 16 off all-terrain vehicles." This is backed by statistics. According to those experts, "Public health experts estimate at least 150 children are killed and 4,000 are hospitalized each year in ATV accidents."

In 2011, 13 percent of all ATV related fatalities for that year involved children younger than 16 years of age, according to the United States Consumer Product Safety Commission. This could be because ATV laws are loosely regulated by states rather than the government. Instead, different states have different laws about the safety and regulations for kids operating ATVs — some states require training while others don't have laws pertaining to children using ATVs, according to the CPSC.

Just like riding a bike, it is important that when kids are in control of an ATV that they practice safety precautions and pay attention to their ATV's safety warnings — and parents should help. According to the CPSC, if children younger than the age of 16 insist on operating an ATV, they should drive an age appropriate youth model with a speed limiter and a smaller engine size. This is because, according to the CPSC, most riders younger than 16 lack the motor skills to operate an adult ATV. When operating an ATV, it is important that parents are aware of their child's ATV's age limit.

When operating an ATV safe for their age, children should also be wearing a helmet, sturdy shoes, gloves, and a long sleeve shirt and pants to protect them from the terrain, according to Penn State Extension. It is also important that children follow the "golden rules" of ATV riding when it comes to their safety, according to Today. These rules include never riding with a passenger, never riding on a public road, always wearing a helmet, and making sure that their ATV is suited for them.

Parents know their children best — and can therefore make a decision as to whether or not they feel ATV use is appropriate for their own kids. But the facts stand — if you're going to let your kids use an ATV, make sure they do so safely and know the protective measures before heading out onto bumpy terrain.