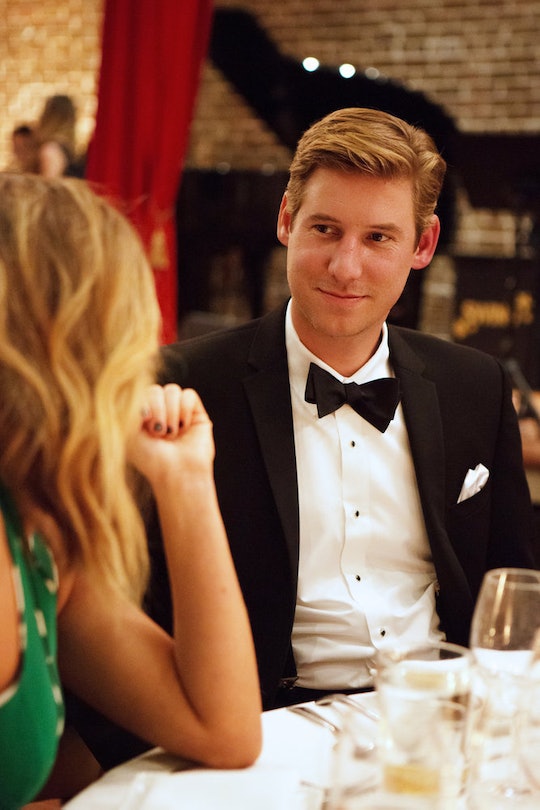 Are Austen & Chelsea Dunzo On 'Southern Charm' Or What?

In Season 4 of Southern Charm I was rooting for Austen Kroll and Chelsea Meissner, I really was. But now that it's Season 5, it looks like their romance has hit quite a snag, and Austen is no longer my favorite baby-faced Southern gentleman. So are Austen and Chelsea back together on Southern Charm? Austen says the door to their relationship is "ajar" and Chelsea says she would like no more 4 a.m. drunken visits, thank you very much. So what's the deal here? Are these two getting back together or what?

In the previous season, Austen was brought on as a friend of Shep's, while Cameran Eubanks tried to set Shep up with her gorgeous and impossibly cool friend Chelsea. But Austen and Chelsea hit it off instead, and it looked for a moment like true love may finally have been found on this wildly addictive show. Instead, as seen in the first episode of the show, Austen quit his job and he and Chelsea broke up. Then Austen began seeing a friend of Chelsea's who he's now ended things with since the filming of the new season. Now it looks like Austen is about to try to make things work with his ex once more. But does it play out the way he seems to want it to?

I don't know how things are going to pan out throughout the rest of the season, but previews of the show definitely hint that there will be some rekindling going on. One clip shows a teary-eyed Chelsea telling Austen that she'll be fine if he continues to date her friend. In another clip, Austen tells an unidentified woman, presumably the woman he's been seeing, that there has been nothing sexual with "her" since they broke up. But the woman then says that she saw "her" sneak into his room one night. I have absolutely no context for this conversation but I'm assuming the "her" is Chelsea, and this would have happened on a group trip somewhere.

Heading into full-on detective mode, I decided to figure out what happened between these two generally likable reality stars during and after the show. Luckily for me and my curiosity, Austen is not great at being sneaky on his Instagram. He posted a picture with a totally different woman with the caption, "Hunch this won’t be our last brunch." That looks like the start of a relationship to me. Commenters identified the woman in the photo as Madison Lecroy, who posted a very relationship-like photo of herself with Austen. She has also posted a photo with the Grande Dame of Southern Charm, Patricia, so I'm assuming she'll be making an appearance on the show.

Heading over to Chelsea's Instagram, my girl appears to be living her very best life with no man needed in various sunny locales, including Costa Rica, Hong Kong, and Hawaii. Chelsea apparently has also been moonlighting as a music video actress, appearing in videos for Ben Fagan and The Lumineers. She hasn't posted any pictures with any guys that appear to be of a romantic nature. This could simply mean she's more discreet than Austen, or it could mean that she is a single gal who's too busy traveling the world to worry about a relationship.

In the end, it appears that everybody got a happy ending, even if it didn't turn out exactly the way viewers wanted or expected. And to be completely honest, I think I'd rather be going on adventures with Chelsea than brunch with Austen. Sorry, not sorry.