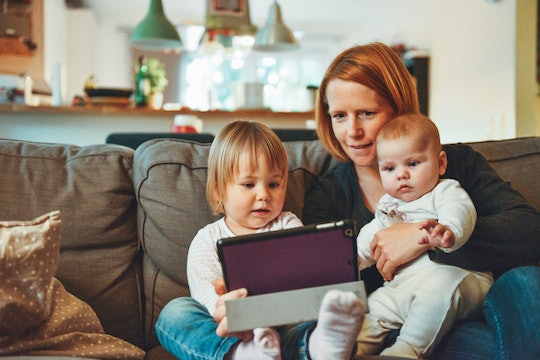 News Flash — Your Baby May Be A Genius

Though babies might seem like little bundles of crying, pooping joy, there's actually a lot more going on in their tiny heads than you could ever imagine. Whether you're aggressively trying to gauge your child's chances of getting into a top school or you're just curious about your little one's mental capacity, you're probably wondering, are babies smart. I'm not saying that your baby's going to be a 6-month-old Einstein, but there is significant research that shows that babies are smarter than you might think.

Talking about infant intelligence probably makes you think of overbearing parents who utilize flashcards and only let their children play with educational toys. And to be fair, the shelves at your local toy store are probably stocked with them. Even the App Store is full of apps for your child to test their learning capabilities. But according to a Parenting interview Alison Gopnik, child psychology professor at the University of California, Berkeley, and author of The Philosophical Baby, there's no evidence that any of these types of products improve a babies intelligence. Especially when it comes to the world of apps. In fact, the American Academy of Pediatrics recommended no screen time for children under the age of 18 months. And even after they reach that age, the time should be regulated.

So if it's not about educational games, flashcards, and apps, where do babies get their smarts? It turns out, babies are incredible observers, even without the extra push in the educational direction. According to Kathy Hirsh-Pasek, Ph.D., a longtime child psychologist at Temple University in Philadelphia, a normal, nurturing environment will teach your baby everything it needs to know.

"Babies are quite clever," Hirsh-Pasek told Parenting. "They're taking in all of this information and processing it, searching for patterns." In the first six months of life, the connections a baby makes are impressive. Just hours after being born, your baby will recognize your face. And in a few weeks, your baby will be imitating your facial expressions, mapping out your emotions and learning them. Expanding their emotions and taking their first steps toward language, and testing how people respond to them are just a few things your baby's doing — probably without you thinking twice about it.

According to CNN, young infants already know an impressive amount about people, languages, and objects. In fact, the news outlet reported that babies have learning methods that are just as powerful and intelligent as those that a scientist would use. They even use statistical analysis in certain situations. And rather than relying on flashcards or tests to improve your baby's intelligence and hone their statistical smarts, CNN noted that children simply thrive when they are loved. Interaction, from cooing, to playing, to talking to your baby, these are all forms of nurturing that will help your baby develop their intelligence from day one.

Though all of those new fangled toys and games for your baby to get an edge on their education might not be proven to expand their intelligence, there is one thing that will. Music. A recent Canadian study at McMaster University suggested that even young babies benefit from exposure to music making. Babies who were just a year old when taking interactive music classes had better communication skills than babies who took a less-active class with music playing in the background. So the next time you're looking for a class to enroll your baby in to give them a leg-up on their smarts? Look for an interactive music class that you and your baby can take together, and you'll be on the road to a world of mastering infant intelligence in no time.