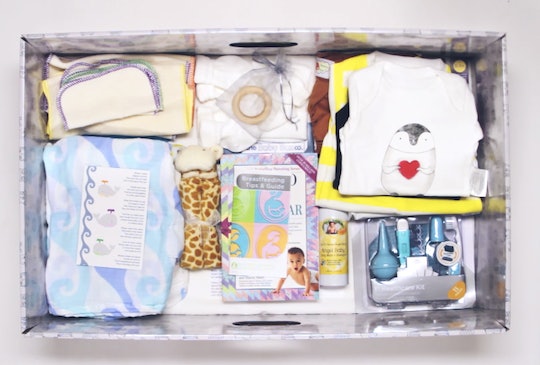 Are Baby Boxes Covered by Insurance?

The Baby Box Co. announced Thursday that New Jersey just became the first state where expectant parents can sign up to receive a baby box for their newborn. The boxes come with things like diapers, wipes, a sleeping box and other items worth about $150. And though the use of baby boxes like the ones that will soon be available in the state has been popular in Finland for awhile, helping the country to achieve one of the world’s lowest infant mortality rates, the idea hasn't totally caught on in the United States — yet. But with the sudden interest and media coverage of the practice taking off in New Jersey, some people are asking — are baby boxes covered by insurance?

According to the Independent, "around 105,000 new baby boxes are expected to be distributed across the state throughout the year, which is in line with birth rates in the state." That's a lot of babies getting some goodies! And a lot of parents who may be wondering how to get one of the boxes, and whether it's something that insurance will cover to support the endeavor. Well, worry not, New Jersey parents, because the boxes are totally free — all you have to do is register online, watch a short "baby box university syllabus" video, and either go pick up the box or have it delivered!

So what comes in one of these baby boxes anyway? According to a story on CNN.com:

The cardboard boxes, distributed at Cooper University Healthcare and Southern New Jersey Perinatal Cooperative, come with a firm mattress, a waterproof cover and a fitted sheet, in addition to diapers, wipes, breast cream, breast pads, a onesie and an activity cart: about $150 in materials.

Most parents would probably say that doesn't seem like a lot in the long run when it comes to caring for a newborn, but it's absolutely a great start. According to the same source, any expecting parent or parents of infants younger than 3 months old in the state can take part in the program and receive a box. That means a whole lot of families can take advantage of the new program.

And because it's free, it's not something you have to worry about insurance covering. All parents have to do is register online at babyboxuniversity.com as a New Jersey resident, watch the 10-15 minute "syllabus" on the site, then take a quick quiz. Once you do, you receive a certificate of completion, and can decide whether you want to opt for local pick-up or direct delivery of your new Baby Box. It's that simple!

Again, it's just a start, as it's only one state, and the boxes don't have nearly everything you'll need to care for a new baby. But anything that may help prevent SIDS — which claims the lives of about 1,500 babies in the US every year — or otherwise lower infant mortality rates can only be seen as a great thing.

If you're a new or expecting parent in New Jersey, head over to babyboxuniversity.com to sign up for the offer. If you don't live in New Jersey, but are interested in getting a box anyway, the Baby Box Co. website has several options listed for sale, though they are, of course, not free like their Jersey-distributed counterparts.