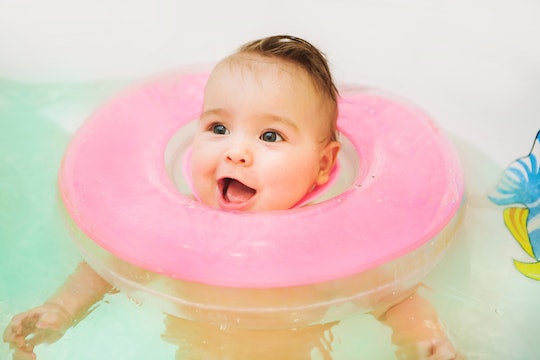 Baby Neck Floats Are Super Cute On Instagram, But Are They Safe?

If you're a mom with access to the internet, you've probably seen a video or photo of an adorable baby in a pool using a brightly-colored neck floaty. It's cute, there's no denying that, but that doesn't mean it's necessarily safe. Of course, a new and trendy device that helps babies enjoy one of summertime's biggest perks seems innocent enough, true. But one pediatric specialist is warning parents of the dangers surrounding the new swimming toys. So, are baby neck floats safe and what do parents need to know about them? Turns out, they're a lot more precarious than they appear.

According to local NBC affiliate WDSU, Kyran Quinlan — an associate professor of pediatrics at Rush University Medical Center, who has also served as chair of the American Academy of Pediatrics Council on Injury, Violence and Poison Prevention — said the popular new devices are "potential death traps."

"Neck floats for babies scare me to death, and I hope they scare parents," Quinlan told WDSU. "To have your precious baby one poorly sealed seam away from going under at the pool is frightening."

But why are baby neck floats so dangerous? As AOL News noted, "any type of air-filled flotation device can potentially pop or deflate during use, immediately putting kids at risk of drowning."

Of course, there are plenty of parents out there who have used these neck floats with no horrible outcomes, but, as Quinlan pointed out, there is only one barrier between your baby, and a possible drowning. In fact, the American Academy of Pediatrics actually advises parents to steer clear of "air-filled swimming aids at all (including arm bands or "water wings") because any deflation immediately takes away their buoyancy," as Good Housekeeping reported.

Obviously, all parents have to do what feels right for their own baby, and it's probably OK to use floats as long as your baby is constantly being watched. According to the AAP:

Whenever infants and toddlers (or weak swimmers) are in or around water, be it in a pool or an open body of water, a supervising adult with swimming skills should be in the water, within an arm’s length, providing “touch supervision.”

And the possibility of deflation isn't the only reason experts are against neck floats for babies. As Francoise Freedman, one of the world’s leading experts on baby swimming, told the Swimming Teachers' Association that "there are the potential risks linked to the frequent use of a neck device that claims total safety and apparent comfort for babies, yet deprives them of the freedom to move which we now know can have long term implications."

So, to summarize: It's probably best to save a few bucks on a baby neck float and handle your little one in a safer manner around the water, such as enrolling them in a swim class. Because as trendy as neck floats may be, your baby's safety will always outweigh a cute photo op.