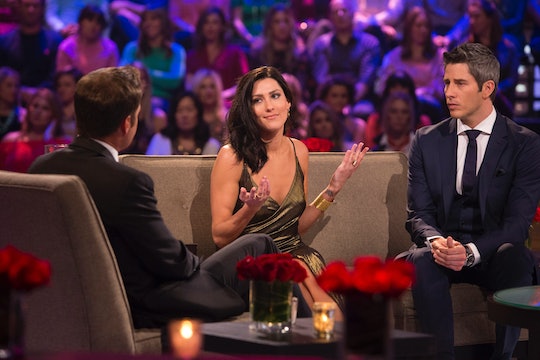 Here's Where Becca & Arie Stand After Their Breakup

It's not totally unheard of for ex couples from The Bachelor franchise to remain cordial, and even friendly in subsequent seasons of the show. For example, Andi Dorfman showed up in the final moments of Nick Viall's season to give her ex some last-minute advice as he geared up to propose, and they seemed to genuinely, platonically care about each other. But after last season's gut-wrenching Bachelor finale, fans may be wondering: are Becca and Arie friends now? Is that even possible after he dumped her two months into their engagement for Becca's runner-up, Lauren B.? During the After the Final Rose special, Becca and Arie had a frank heart-to-heart which showed that they were civil with each other, but both very focused on moving forward. Based on subsequent interviews, however, it seems like things are pretty icy between the pair.

Becca initially offered up a ton of emotional generosity for Arie's predicament, even though she was obviously devastated to break off her engagement. She fell squarely in the "I only want to be engaged once" camp and told PEOPLE in a sprawling interview this past March that she felt she had been "robbed" of the experience with Arie reneging on his proposal. But, added Becca:

At the end of the day I wouldn’t change the experience because I met so many amazing people and I fell in love and I had this great experience and memories. I’m still going to feel a sense of compassion for him because I did love him but at this point, I want him to be happy, I want to be done and not have to worry about them anymore. They’re going to be together and do their thing. I wanted to move on and have my person that I can focus on and live my life with. At the end of the day, I do forgive him.

Unfortunately, just two days later, in a joint interview with Us Magazine, Arie and Lauren discussed their wedding guest list and landed a pretty tone-deaf "joke" about Becca's attendance.

"I would like to have some of my friends from the show there," Lauren suggested. "I think Arie would, too."

Bro. Really? You are already America's second-worst Bachelor (somehow, Juan Pablo still came out the bigger jerk), and you're going to pretend as if Becca did anything to warrant not being invited to your wedding? She was literally nothing but kind, compassionate, forgiving, and graceful. Needless to say, it doesn't seem like Arie and Becca are on speaking terms, let alone cordial, supportive exes. And lets be honest: Becca probably wouldn't want to go to that wedding anyway.

But, there's another possible plot twist here. In an interview with Variety, Robert Mills, senior VP of alternative series, specials, and late-night programming, and the ABC executive in charge of The Bachelor franchise, suggested that Becca may still be hung up on Arie during her season of The Bachelorette. When asked what he expected of Becca's upcoming season, Mills said:

This could be one of the stranger seasons of The Bachelorette because she might not truly be over Arie and it may not work — I certainly hope it does, and we will do everything we possibly can to make sure it does, but you just don’t know. It certainly is a chance worth taking.

It would make complete sense if, just two months after having her engagement end on national television, Becca might not be 100 percent back on her feet yet. If anything, that's to be expected. Add in the heightened emotions of The Bachelorette's grueling shooting schedule, and it's easy to see how Becca might experience some latent grief over her last relationship. But as long as Arie doesn't, god forbid, show up mid-season, I think Becca will be just fine.