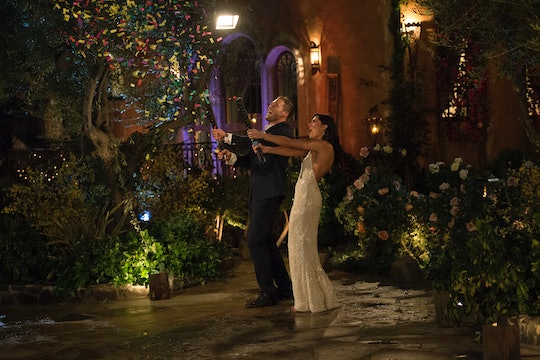 Becca Is Rooting For Colton To Find Love

Colton Underwood made it pretty far on Becca Kufrin's season of The Bachelorette; he reached the top four before she sent him home. She went on to become engaged to Garrett Yrigoyen and now Colton stars in The Bachelor Season 23, which premieres Jan. 7. Since they've both moved on with their love lives, are Becca and Colton still friends?

They might not be besties, but there doesn't appear to be any bad blood between them. Social media is one indicator of friendship, and Colton and Becca don't appear on each other's Twitter or Instagram accounts. Becca's 'gram is full of photos of her puppy and her fiancé; Colton has focused more on Bachelor promo as of late, with a few pony pictures for good measure. But even if they're not in each other's everyday lives, that doesn't mean they're not on good terms.

In an interview with Us Weekly, Becca had nothing but positive things to say about Colton becoming the Bachelor. She offered him tips so he could maximize his experience and made it clear that she's supportive of him finding happiness in the future. She also revealed that Garrett and Colton have remained friends after the show, so if her fiancé is friends with Colton, then Becca must be cool with him too.

Becca said that she wasn't surprised Colton was chosen for The Bachelor. In fact, both she and Garrett wished him well. "Garrett is still in touch with him and friends with him," she said. "We support him." She wanted all of the contestants from her season to do well and fall in love; it may not have worked out with her, but that didn't mean they don't deserve to be happy. She concluded by confirming that she and Garrett were excited for Colton's journey.

Garrett was more effusive in praise for his friend. "[Colton is] a good guy," Garrett said, adding that Colton was kind-hearted and well spoken, with a lot going for him. Garrett believed that Colton would be respectful to the women competing for his heart and hoped that he would find someone "as loving as he is." It seems brotherhoods forged in the Bachelorette mansion can stay strong after the show concludes — even if your friend gets engaged to the very girl you were trying to woo.

Even before Colton was announced as the Bachelor, Becca was rooting for him to reunite with her friend Tia Booth. That love triangle led to Colton being sent home on The Bachelorette, so it wouldn't be surprising if there were some hard feelings after all was said and done. However, at the taping of the Men Tell All special, Becca told Us Weekly that if Tia and Colton "got back together and found love" on Bachelor in Paradise, then she "would be happy for them because they both deserve that."

Things didn't work out with Colton and Tia, but it sounds like the sometimes-complicated love stories of Bach nation don't necessarily impact the friendships that form. Becca and Colton may not be best friends, but they're certainly friendly.