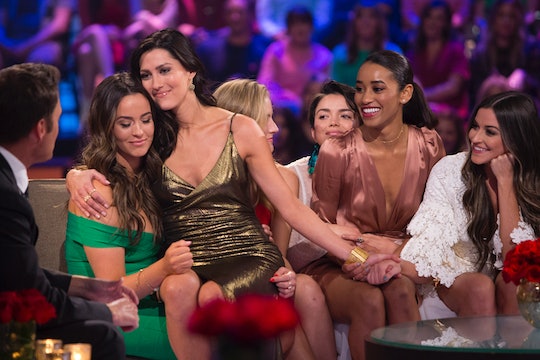 So Are Becca & Tia Still Friends After 'The Bachelor'?

Oh, the webs Bachelor contestants past and present weave! Apparently, there is some inter-season mingling going — and Becca and Tia are both involved. Are Becca and Tia from The Bachelor still friends? They seemed tight after all the Arie drama went down, but it seems like they have completely separate drama brewing.

After The Bachelor revealed that Arie bait-and-switched Becca into believing they'll be together forever, Tia seemed completely on her side. In an interview with ET, Tia talked about Becca's Bachelor heartbreak. "Becca is such an amazing, forgiving person and it's almost like, 'OK, why would something like this happen to her? Someone that is such a pure, genuine person, it's hard,'" Tia told ET at the time. "It's not just a breakup. It's a breakup because he knew he had feelings for someone else.

Furthermore, Tia was one of the contestants that went on After the Final Rose to root for Becca. While there hasn't been any new developments in recent months — and Tia hasn't appeared on The Bachelorette (yet, at least) — there appears no sign that they have beef with each other. Tia's "romantic connection" with Colton, one of Becca's contestants, though, may challenge their friendship.

Apparently (some spoilers incoming!), Colton slid into Tia's DMs a few months ago. According to a thread on The Bachelor subreddit, Raven Gates (Tia's BFF) and Adam Gottschalk revealed that one of Becca's contestants kept messaging her. Reality Steve has all the details but, as per Reality Steve, he also drops a ton of other spoilers so I will spare you. Becca herself confirmed that Tia and Colton had a romantic connection prior to his coming on the show.

"Yeah, they did have a past, so that's something Tia and I had conversations about," Becca told ET in an interview. "They dated. I don't know how serious it was, but you'll see all of that unfold throughout the season as well."

After she confirmed the rumor, Becca also took some time to describe how much she was initially drawn to Colton. She said, "Colton, night one, I remember thinking how big of a heart he had... What really drew me to him that first night was the fact that he had started a nonprofit [for cystic fibrosis], and that's something near and dear to my heart because two of my cousins have it." She continued, "So night one, I felt like we really connected over that."

Of course she wouldn't reveal Colton's fate on the show just yet, but she also didn't give any details about her friendship with Tia now. I'm dying to know what these "conversations" consisted of, and whether she and Tia are still friends afterward. I'm sure all will be revealed during Becca's season, so for now fans will just have to speculate.

Tia isn't Colton's only famous (or, well, famous to Bachelor Nation, anyway) ex. Colton dated Olympian Aly Raisman publicly for six months and broke up in August 2017. Colton credited long-distance as the reason for the split; he was based in Colorado while Raisman was in Massachusetts. "We’re taking a break right now," Colton told the Lincoln Journal Star. "We’re still good friends and talk, but all that travel had been a nightmare."

With two relatively well-known exes, Colton's big reveal that he is apparently a virgin later this season (which was foreshadowed in a promo) may cause some raised eyebrows. It's not anyone's place to judge someone based on the amount of sexual partners they have, but Colton's reasoning stands out: "I'm not waiting for marriage. I'm waiting for the right person." So if Aly and Tia weren't right for him, will Becca be? Will he even make it to fantasy suites? Fans will have to keep watching to find out — and find out if his relationship with Tia hurt her friendship with Becca.