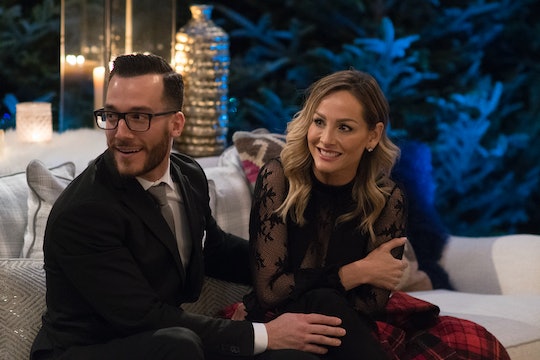 I wasn't originally excited for The Bachelor Winter Games; I didn't think Bachelor Nation needed yet another spin-off. Five minutes into the premiere, though, I was all in — and it got better from there by seeing couples quickly pair up. Just take Benoit Beauséjour-Savard and Clare Crawley, for example. But are Benoit and Clare dating after The Bachelor Winter Games? They're one of the first couples to gravitate towards each other in the premiere, so I can't help but be curious about their future together.

In terms of familiarity, American Bachelor fans will definitely have more knowledge about Clare. She's actually infamous in Bachelor Nation, and while I started watching after her stint on The Bachelor, her moments are still some of the most dramatic of the show. Clare was first on Juan Pablo Galavis's season of The Bachelor, and she was the runner-up. She stormed off in what is now a classic Bachelor moment: when Juan Pablo rejected her she said, "I would never want my children having a father like you." This did not come unprompted, however. Yes, she got rejected, but the reason Clare made this comment is because of what Juan Pablo whispered to her in a helicopter ride to the proposal site: "I love f*cking you but I don't know you," he said according to a source at Us Weekly.

Clare couldn't believe that Juan Pablo would say this, especially when breaking up with her. "I'm shocked," Clare said afterwards. "He chose to tell me something that no woman wants to hear ... It was insulting and it was offensive."

After her stint on The Bachelor, Clare went on Paradise for two seasons. Once again, it didn't end too well. When she left, Clare announced her "retirement" from Bachelor in Paradise. In her pissed off state, she also said she should've been the Bachelorette lead: "If they would have just chosen me for The Bachelorette, I wouldn’t have to be here... I would have found my husband." Well, despite her frustration and her apparent retirement, Clare is back for The Bachelor Winter Games. Even in her introduction she said she never thought she would do this again, but maybe this will be where she finds love.

In the premiere episode, Clare seemed to cozy up to Benoit pretty quickly. Benoit was on The Bachelorette Canada and hails from Montreal (hence the French accent). He was vying for hairstylist Jasmine Lorimer, but he didn't make the cut. Benoit was eliminated when he told Jasmine he was apprehensive about bringing her home for a hometown date. [Buzzer noise] Classic rookie mistake, Benoit! This is The Bachelor, you have to be ready to drop everything and marry someone you met two months ago.

Clearly Benoit and Jasmine were not meant to be, which is why he — like Clare — came to The Bachelor Winter Games looking for love. They seemed to hit it off pretty quickly. After the first day of games, all the contestants were in their Vermont cabin. Benoit and Clare decided to cook together, which is where they started stealing kisses. In Bachelor World, this means they're going to begin talking seriously about marriage in 0.5 seconds.

Are Benoit and Clare still together? It's honestly too soon to tell. Neither of them have made an indication on social media that they're no longer single. They've both shared that they're going to appear on The Bachelor Winter Games, but they only posted promotional photos and clips. Seeing how short the season is, though, (there will only be four episodes), Bachelor "World" will know soon enough if their relationship holds up or if they'll leave Vermont without any medals or rings.