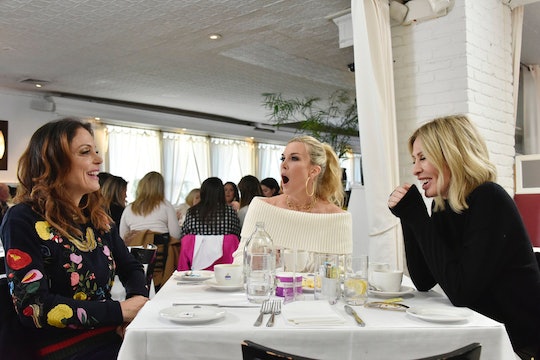 Bethenny Frankel and Carole Radziwill were inseparable for seasons of The Real Housewives of New York, but something has been notably different in Season 10. They don't seem to be spending as much time together, with Bethenny focusing on her charitable endeavors and Carole wrapped up in both the marathon and her new pal Tinsley Mortimer. Their new distance has resulted a few fights, leaving fans wondering: are Bethenny and Carole still friends?

It's been difficult to tell on the show. Even in the midst of their arguments, both Carole and Bethenny have tried to reassert how much they care about each other, though that hasn't prevented them from making a catty comment or two about each other. It seems as though neither is thrilled about the fact that they're not hanging out nearly as often as in days past, but they just can't seem to get on the same page. And the tension between them seems to have continued once the cameras stopped rolling.

In an appearance on Watch What Happens Live, Bethenny admitted to Andy Cohen that there had been "a shift" in her friendship with Carole, whereas in a separate appearance on the same show Carole disputed several things Bethenny had said about her. It seems as though things are still strained, though Bethenny and Carole have acknowledged how important their relationship is to both of them.

In Season 10, Bethenny felt that Carole didn't really have an interest in her charitable work in Puerto Rico; because that was what Bethenny was most focused on, it left them at odds. She also thought that Carole had more in common with Tinsley based on their lifestyles. But Bethenny insisted that she bore no ill will toward Carole, which she reaffirmed while taking to Australia's TheFix. Us Weekly reported that Bethenny said:

There's no fallout between Carole and myself. I really love Carole. Most of my friends, my best friends, I'd have for 30 years, my best friends. So I have my really tight-knit group, and meeting any new people is always, I don't want to say risky, but it's not the same deep and dimension as friends that you'd had your whole life.

Bethenny went on to say that because of the circumstances of reality TV, any tiny change in a friendship can be blown out of proportion since so many people are watching it all unfold. Still, she insisted that she loved being on the show with Carole and called it a "great experience" despite any difficulties they'd had. From Bethenny's point of view, it seems like things are just fine between them.

However, Carole's perspective isn't quite the same. She spoke to a couple of publications about seeing a different side of her friend and not being entirely happy with some things Bethenny had done. To Us Weekly, Carole said, "I've thought about that friendship and I've kinda adjusted my expectations of our friendship."

Carole elaborated on that in an interview with E! News. She described herself as "an idealistic kind of person," which contributed to how she saw Bethenny. During Season 10, she began to see Bethenny "a little bit more realistically and less idealistically." According to Carole, she believed that they had a real friendship but that Bethenny's behavior wasn't "consistent with someone I would consider a really good friend." She said:

It was a bunch of things. It just felt like suddenly it was very gossip-y and mean and unnecessary, and I was just like, that's not the person I knew.

Carole has written some very critical blog posts about Bethenny for Bravo's Daily Dish, too. She disputed Bethenny's story about Adam declining a charitable trip to Houston because it wasn't paid, and she didn't appreciate some digs Bethenny made towards her in the confessional segments.

The conflict between Bethenny and Carole clearly hasn't been entirely resolved, though it doesn't seem like they've called it quits either. Hopefully the reunion specials will get to the bottom of what's going on with Bethenny and Carole, because RHONY just isn't the same without their friendship.