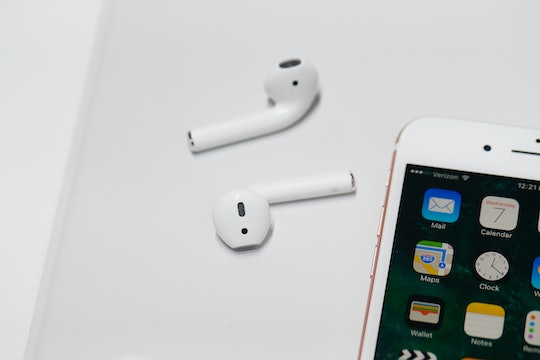 Apple's iPhone 7 announcement highlighted one major change: no more headphone jack. Instead of relying on traditional wired earbuds, the phones will send sound to wireless headphones via Bluetooth. There are definite upsides to the innovation; Who hasn't had a seemingly endless battle with tangled cords? Despite the convenience of wireless listening though, the change does prompt one major question: Are Bluetooth headphones safe? They do expose listeners to radiation, but the risk to health may be lower than expected.

Apple announced the iPhone 7 and iPhone 7 Plus on Sept. 7; sales of both begin Friday, Sept. 16, according to a press release, and quickly sold out, though vendors are said to be expecting new shipments soon. Brand devotees will recognize some major changes: camera upgrades, extended battery life, and significant iOS updates. In addition to incorporating stereo speakers, the phones will be equipped to use wireless headphones, called AirPods. Apple AirPods go on sale in October, and though they need to be charged, they allow for completely wireless listening, synced seamlessly to activity on the iPhone.

A Wired review of AirPods claims that they feel a lot like EarPods, and that a pair with a fully-charged battery lasts longer than five hours. Despite a $159 price tag, senior staff writer David Pierce didn't notice a significant improvement in sound quality over EarPods. But aside from discussions of comfort, convenience, and quality, questions remain about safety.

Concern about cellular radiation isn't unfounded. In May, the National Toxicology Program (NTP) released findings from a study designed to assess the impact of long-term radiation exposure in rodents; According to Scientific American, scientists mimicked the level of radiation exposure common to humans who consistently use cell phones, at times exceeding it. Of the "thousands of rats" studied, those exposed to low levels of radiation over long periods of time "developed rare forms of brain and heart cancer," while rats in the control group did not.

Earlier studies linked human cell phone use to the same kinds of rare tumors. Though the scientists did not make any claim of definitive and frequent causation, their findings did suggest that there may be dangers inherent to long-term low-level radiation exposure that warrant further investigation.

Prospective iPhone 7 buyers may not need to be overly concerned about their wireless headphones, though. The AirPods, like all wireless headphones using Bluetooth, do emit radiation, but experts consulted by The Los Angeles Times do not think they'll increase cancer risk. Bluetooth headphones are only communicating with the phone, so they don't require a lot of transmission power; they're also likely to communicate for shorter periods of time than, say, a cell phone, leading to a relatively low amount of electromagnetic radiation being released. Using headphones of any kind may actually be beneficial: holding a cell phone up to one's head significantly increases radiation exposure and, in turn, health risks.

It's impossible to definitively determine whether AirPods are safe in a brief article; A full investigation would require a much more thorough review of scientific literature and, likely, independently-conducted studies focused specifically on Apple's new technology.

For now, iPhone users still skeptical about AirPods can avoid them altogether: According to Apple, each phone comes with a set of EarPods (their classic wired earphones) and a headphone jack adapter. It may add bulk, but it does allow fans of classic headphones to use their favorite pair. Either way, it seems that headphones of any kind may be safer than using no headphones at all and holding the phone up to one's ear.