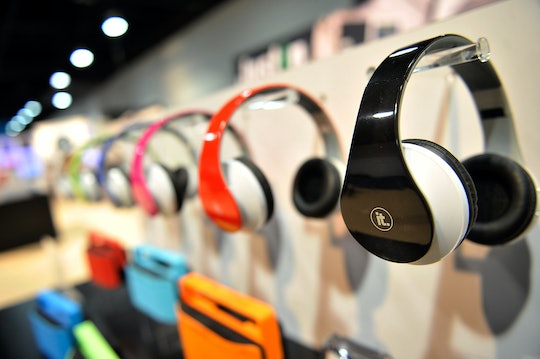 Are Bluetooth Headphones Safe For Toddlers? It's Worth Considering

The answer is yes. Which is a relief, unless you're willing to give up devices that use wireless technology altogether — and who wants to do that?

Bluetooth devices work on the same frequencies as any other wireless device, such as your cell phone. The effects of cell phone radiation have been studied since the devices first hit the market, and now most cancer researchers agree that, despite the rumors floating around the deepest recesses of the internet, the risk to a person's health is non-existent. All major health organizations say that there is no proven connection between cell phone radiation and health outcomes.

But unlike smartphones, which connect to a network far, far away, a bluetooth headphone set (or any bluetooth device, like a speaker), only has to connect to another device on a wireless network. So the radiation emitted is about a 1,000 times less than that of a cell phone. So if you let a toddler FaceTime grandma and play games on an iPad, slapping on a pair of bluetooth headphones won't hurt them. There are also less wires that they can get tangled up in, which is always a good thing for your own peace of mind, too.

In 2011, the World Health Organization did a study on cellphone safety with 31 scientists from 14 countries and, according to The New York Times, it concluded that cellphones were "possibly carcinogenic.” But no more so than some dry cleaning materials that might be on your best jacket. So it's a toss up about how particular you want to be.

In fact, because of the distance between the cellular receiver and your bluetooth device, using the newer headphones might actually be safer than talking into your smartphone all day or wearing a smart watch, since it's taking in a received cellular connection that essentially bounces off of another device. So, even if it might be less safe to slap a FitBit or Apple Watch on a toddler (or yourself), since it's essentially the same as having a cell phone plastered to your skull all day, emitting radiation, bluetooth headphones are almost certainly okay for them (and you) to use.

The most dangerous thing about bluetooth headphones, at this juncture at least, is that they're crazy expensive. I don't know about you, but I'm not handing a 3-year-old my new Beats headphones for a lot of reasons that have nothing to do with safety and everything to do with sticky toddler fingers.