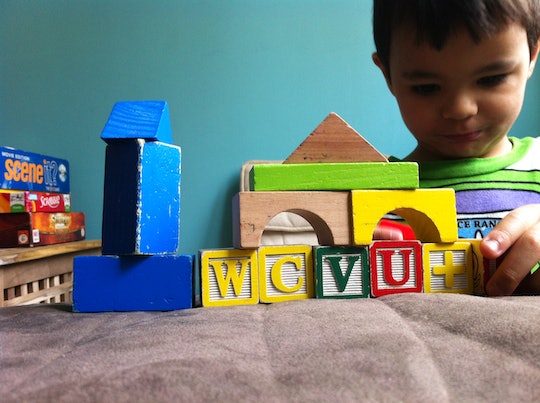 My son has autism. When he was about 11 months old, my husband and I started noticing some developmental delays. He wasn't babbling, he didn't point or clap, his eye contact was limited. Months later, the delays would continue. He didn't speak, he became obsessed about things, loud noises terrified him — it would be years before we got his autism diagnosis. When I found out my next child was a girl, I was relieved. I'd heard girls weren't as likely to get autism. But is that true? Are boys more likely than girls to develop autism? New research suggests the gap might not be as wide as we thought.

More Like This
Vaccinated People Can Ditch Masks. Where Does That Leave Kids?
How To Find The Best Insect Repellent For Your Kids & Babies
9 Signs Your Child Is Overheated
15 Face Masks For Kids That Are Cute, Comfortable, & Get The Job Done

The simple fact is that boys are almost three times more likely to develop autism than girls, according to Scientific American. The reasons behind this phenomenon have mostly eluded the scientific community. However, a recent study published in the Journal of the American Medical Association-Psychiatry (JAMA) found that it might have something to do with the ways in which the male brain develops. Something in the "normative phenotype development" that could increase the prevalence of the disorder among boys as compared to girls.

Researchers found that it might have to do with the relative cortical thickness, which means they looked at the outer layer that surrounds the brain, which is typically thinner in biological males. They found that this difference may account for the differences in diagnosis, because it protects key parts of the brain that are used in language and development.

Although it should be noted that there appears to be a huge disparity in how biologically girls and boys are diagnosed. According to Scientific American, because the symptoms present differently between the sexes, girls are often undiagnosed or misdiagnosed because their red flags might be different. The article noted, "Behavioral and preliminary neuroimaging findings suggest autism manifests differently in girls. Notably, females with autism may be closer to typically developing males in their social abilities than typical girls or boys with autism."

Girls can go undiagnosed and untreated for years, putting them behind their male peers when it comes to aggressive therapy that can often mean the difference between important levels of functioning and their ability to cope in the outside environment. There is a major problem with how we diagnose autism. The article noted that "the criteria for diagnosing autism spectrum disorder (ASD) — a developmental condition that is marked by social and communication difficulties and repetitive, inflexible patterns of behavior — are based on data derived almost entirely from studies of boys." That means that when it comes to girls on the spectrum, they don't have a rubric to use for diagnosis that would be beneficial to them.

It's like asking a boy and a girl to use a urinal, and judging the girl based on the fact she can't pee standing up.

It should be said that it might not just be a problem with diagnosis. When scientists began to question if boys are more likely than girls to develop autism, they found something interesting. As per an article in TIME, Harvard researchers posit that there is something in the development of girls that protects them from the disorder, and if girls do become symptomatic, that means they have a greater than average likelihood that there is a familial component to their ASD. They also theorize that there must be more environmental triggers present for girls to develop the disorder.

The numbers might not be perfect, but they don't lie. Boys are more likely to develop autism than girls. If you're worried about your little girl, Verywell has a great list of red flags that are specific to girls. Talk to your pediatrician about your concerns. It's the best thing.