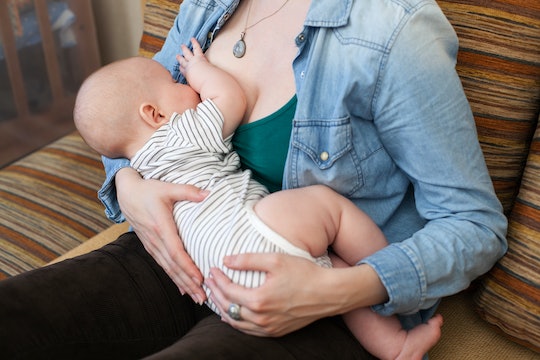 Breastfeeding Moms Should Be Exempt From Jury Duty, But Only These States Recognize That

Jury duty is a civic responsibility and with every defendant entitled to a jury of their peers, the courts need bodies in the seats of the jury box. Each week, citizens receive summonses that compel them to report to their local court, federal court, or Grand Jury. Some people greet their summons with excitement, but others don't share that enthusiasm. Often, it's not for fear of serving, but more because of the logistics. Although some states have laws that exempt full-time childcare givers, you may wonder: are breastfeeding moms exempt from jury duty or do they need to serve?

Combining nursing and jury duty is pretty rough and 17 states, as well as Puerto Rico, have chosen to give breastfeeding women either an automatic exemption or the ability to postpone. According to the National Conference of State Legislatures, these states include California, Connecticut, Idaho, Illinois, Iowa, Kansas, Kentucky, Michigan, Mississippi, Missouri, Montana, Nebraska, Oklahoma, Oregon, South Dakota, Utah, and Virginia.

Representatives in Ohio introduced legislation that would have allowed them to join this list, but it is still in the House Government Accountability and Oversight Committee and has not yet made it to the floor of the House for a vote. Since the bill was introduced in early 2017 and isn't yet there, it sounds like it has stalled.

Nursing moms in the states without exemptions have lawmakers who clearly have never had leaky or engorged breasts or had to pump in dirty bathrooms, broom closets, or the front seat of their car. Those who oppose giving breastfeeding moms the exemption have said there's no reason they can't pump and that the baby will be fine with a bottle, but that's so blind and short-sighted, it's stunning. Anyone who says that has never nursed a baby.

So what are your choices if your state doesn't have that exemption? You can figure out a way to pump, which isn't as easy as it sounds, particularly if you are on a trial (that can last an indefinite amount of time) and can't necessarily find time every few hours to sneak off somewhere to pump. That leaves you in a jury box with enormously distracting engorged breasts. How is that in anyone's best interest?

You could try to bring your baby with you, but as a Missouri woman found out in 2013, they could charge you with contempt of court.

Some states have exemptions or allow postponements if you are the primary childcare provider of a child under five years old. Certainly, nursing babies fall under those limits, but if you are doing anything where you receive a salary, even if it's something you do while your baby is napping, you might not receive that exemption, as a blogger who was a full time at-home parent found out when he tried to get out of service. And if you work outside the home and have childcare, you will need to serve, even if you require periodic pumping breaks.

If you are unsure what your state or county rules are, go to their website or call the clerk's office. A summons should have a phone number on it for questions. It's important to do this well in advance of your service, so you're not stuck looking for childcare or figuring out how to pump at the last minute. And warning: Even if you are serving in one of the states listed above, don't assume that the process will be easy (some states may request a medical note from your doctor, or for you to make an oath in the courtroom, as detailed by The Bump).

There's rarely a good time for jury duty, but the period of time when you are nursing, particularly if your baby is young and you are breastfeeding exclusively, is possibly one of the worst. It's great several states have recognized this and let's hope the rest wake up and figure it out soon.