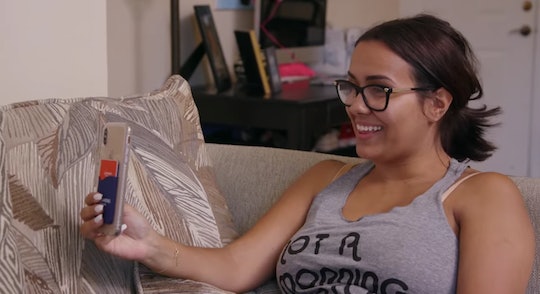 Relationship troubles are par for the course on Teen Mom 2. Since the show follows every facet of its cast members' lives, problems with their partners are bound to come up from time to time. Things appeared to be going well for Briana DeJesus and her boyfriend John Rodriguez, until some incendiary Instagram DMs cast their relationship in doubt. So are Briana and John still together?

On Teen Mom 2, Briana received screenshots of an Instagram conversation that implied John was seeing someone else. In August 2019, Briana spoke to Us Weekly to dispel those particular rumors, though she also confirmed that she and John were no longer involved. They had broken up, but the rumors of him being unfaithful weren't why. "There was absolutely no cheating in our relationship," Briana said. "John's a really great guy and the allegations were completely false."

However, they still weren't happy together. Briana felt she had moved on from her last relationship too quickly and she wasn't actually ready to be in another one; she hadn't given herself enough time to heal. The fact that they were long distance didn't help, either. John lived in New York and Briana in Florida, making it difficult to see each other regularly. Ultimately, Briana realized that she needed time to focus on herself.

But when Briana followed up with E! News in September of this year, she seemed more conflicted about how things had ended with John. She reiterated that they were not together and hadn't spoken, but also said that she didn't know "exactly what's going on in our relationship right now." She was uncertain about how things would play out between them on Teen Mom 2. "It's very confusing and hard to talk about," she said.

However, she stuck to her assertion that she wanted to prioritize herself and her daughters, Nova and Stella. She wanted to devote more time to her business, Bri Baby Beauty, where she offers eyelash extensions, lifts, and tints, as well as microshading for brows, teeth whitening, facials, and waxing, according to their Instagram account. "I don't have time for a boyfriend right now or try to figure those things out," Briana told E! News.

From the sounds of it, Briana's split from John might be a complicated one. Though she has since stated that any cheating allegations were false, she might still be unraveling fact from fiction on the show. The episodes were filmed several months ago, so Briana likely didn't have everything figured out then; the breakup might have been a tricky situation even if it did end up being for the best. Her trepidation about seeing it play out could hint at some tense moments to come.

But the good news is that Briana appears to be doing well in the aftermath. Her Instagram account is packed with pictures of her and her daughters celebrating school milestones and preparing to move into their new home. It may not have been an easy road to get there, but it does look like Briana is moving on.