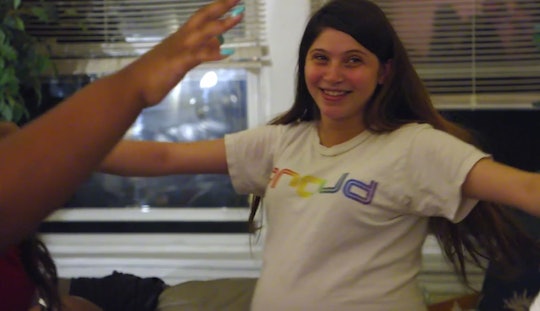 Brianna & Danae Struggle With Their Relationship On 'Teen Mom: Young And Pregnant'

MTV's new spinoff Teen Mom: Young and Pregnant has a lot of people curious about the young moms and their families after the show has wrapped up, particularly when it comes to Brianna Jaramillo and her boyfriend Danae. So are Brianna and Danae dating after Teen Mom: Young and Pregnant? The show depicts how, even though they appear to truly love each other, they still struggle with their relationship. At such a young age, it's obviously hard to have the most mature relationship, and that goes double when you're also expecting a little one. I've been pulling for Brianna and Danae, but unfortunately it looks like it wasn't meant to be.

According to Brianna's Facebook page, she has a new boyfriend, with whom she posts plenty of photos alongside her son, Braeson. Though I really wanted Brianna and Danae to work out, it looks like even though they loved each other, their problems were too much for them to work out in the end. And make no mistake, the show did highlight a lot of their issues. The couple had said right from the beginning that they had broken up and gotten back together several times beforehand, and it looks like those problems caught up with them. Young love can be tough.

In a score for representation on reality TV, Brianna's boyfriend Danae is transgender. The two had a tumultuous on and off again relationship for a few years when, during an "off" period, Brianna had sex with another man and got pregnant. The pair got back together and Danae decided to step up and be the father of Brianna's baby, even though he isn't his biological father. In her casting video, both Brianna and Danae appeared very mature for their ages, and totally on-board for the whole parenting thing, even when doctors told them that the baby would be born without his left forearm.

As far as her relationship with Danae goes, Brianna explained in the video that she fell in love with him for who he is, and him being transgender had nothing to do with it. On the show it's been explained that Danae left his native home in Chicago in order to be with Brianna and their son in Wisconsin. Though Danae was clearly willing to give up a lot for this relationship, it did not come without a fair amount of drama, even on the show.

They got into a big fight when Danae decided to go out without Brianna, and she wound up chasing him down the street barefoot. He stopped the car to pick her up, but when she changed her mind, he left her to walk several blocks home, (again, barefoot), pregnant, in the middle of the night. Neither Brianna nor Brianna's mom were very cool with this, and the cracks in the couple's relationship started to show. In the following episode, Brianna and Danae visited Danae's family in Chicago, where they all seemed incredibly warm and supportive.

Here, Brianna explained that the couple decided to name their son Braeson because it's a sort of portmanteau of their names, with the "BR" from Brianna and the "AE" from Danae. Brianna also said that no matter what happened between herself and Danae that Danae would always be Braeson's father, and his family her family. Seeing as the two are no longer together, I really hope this is the case, since Danae's family seemed so solid. In any case, I hope everyone is happy now.