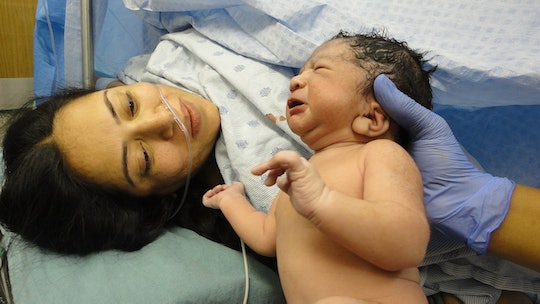 Modern medicine has made pregnancy and birthing much safer for women, but it's now been discovered that there could be some very long lasting effects, specifically where C-sections are concerned, on the overall global population. But are C-sections really affecting human evolution? Researchers recently sought to assess the possible implications of the procedure due to its commonality. Ultimately, they found was a correlation between C-section frequency and an actual change in women's bone structures over time.

The study, published in the journal Proceedings of the National Academy of Sciences, ponders the "long-standing evolutionary puzzle [of] why the pelvis has not evolved to be wider" so as to ease human childbirth. This trend has been exemplified in data; Whereas in the 1960s, 30 in 1,000 babies didn't fit down their mothers' birth canal, recent numbers have shown that this total has now risen to 36 in 1,000.

Seeing as maternal mortality has gone up in the age of frequent C-sections, the mathematical model exhibited in the paper indicates that narrow pelvises (an occurrence referred to scientifically as "fetopelvic disproportion") subsist because of this practice. Evolutionarily speaking, women with small pelvises would have, in the past, been unlikely to survive childbirth. Now, with C-sections saving mothers' (and babies') lives, narrow pelvises will continue to be passed down.

"Women with a very narrow pelvis would not have survived birth 100 years ago. They do now and pass on their genes encoding for a narrow pelvis to their daughters," explains Dr. Philipp Mitteroecker who works in the department of theoretical biology at the University of Vienna.

There's another aspect of the circumstance, which acts as an "opposing evolutionary force" to narrow pelvises: Whereas mothers' pelvis' are remaining narrow, newborns' heads are getting larger. Though this generally means that babies are healthier, it also makes them less able to fit through birth canals, thus necessitating more C-sections. The delicate balance between a baby's head size and a mother's pelvis size has then been tipped.

Mitteroecker explained the significance of this lack of balance, saying:

Based on this model, we predict that the regular use of caesarean sections throughout the last decades has led to an evolutionary increase of fetopelvic disproportion rates by 10 to 20 percent.

Seeing as the research was purely mathematical in nature, there is some room for other explanations as to why mothers' pelvis size and babies' head sizes are increasingly more disproportionate. Regardless, if these trends continue, C-sections will likely become even more common than they already are.