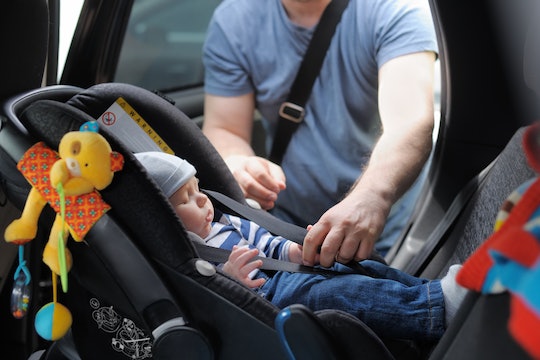 If you've ever been in a car accident, you know what a terrifying and deeply unsettling experience that can be. And even if everyone involved is OK, the added ensuing headaches of fixing any damage to your car and dealing with the insurance company can make it feel like the nightmare will never end. And for parents of young kids, there's another caveat that comes as a surprise to many: After a crash, you are advised to replace that expensive, practically brand new car seat your baby loves to nuzzle up in. It's a vital safety measure that's also a major pain in the butt, but the good news is that, most of the time, car seats are covered by insurance.

So, even if your running in a million different directions trying to address the aftermath of the split-second collision or T-bone situation, most parents can rest easy knowing that they will be able to replace their kids' car seats free of charge. Of course, you'll still have to shell out of the car seat the first time around — an expense that can easily climb into the hundreds-of-dollars range — but it's nice to have the peace of mind that, if you've chosen the right car insurance plan, not having to do that all over again will mean one less thing to worry about.

According to CarInsuranceComparison.com, most car insurance companies will replace car seats after there's been a wreck. Your chances of securing that replacement value are extra high if you have a comprehensive plan. As Hanover Insurance Group chief marketing officer told U.S. News & World Report in 2015, his company will provide $300 towards replacing the car seat (as long as the seat was in the car at the time of the wreck, of course).

But even though it's a requirement that the seat be in the car at the time of the crash in order to qualify for an insurance-funded replacement, it doesn't have to have been holding a kid. In fact, car seats could look totally undamaged but still have been rendered unsafe, according to Auto Insurance Center. The force of the crash could have caused hairline fractures to develop in the plastic, or there could be stress marks that the average person would not see.

Here's how registered nurse and injury prevention expert Donna Laake explained it to the site:

People don’t fully understand how bad crash forces are. If you take the weight of a person or car seat and multiply that by your speed, that’s the force you will experience in a car crash. If a seat weighs 10 pounds and you’re going 50 mph, you’re getting 500 pounds of crash force on that seat.

Of course, not all car insurance policies are created equal, so it's a good idea to check with your provider now to make sure that a car seat replacement would be covered in the event of an accident. But, let's say you've already been in a crash, and you've gotten the bad news that you're responsible for the replacement all on your own. What to do?

First, consider the how serious the crash was. The National Highway Traffic Safety Administration (NHTSA) recommends that all seats be replaced if it was moderate to severe, but offers some leeway if the crash was minor. It's only considered minor, though, of each of the following is true, according to the NHTSA:

If your crash doesn't meet those criteria, you really should replace the seat. Yes, it can be a huge expense, but your child's safety is on the line and it's always better to err on the side of caution with car seats.