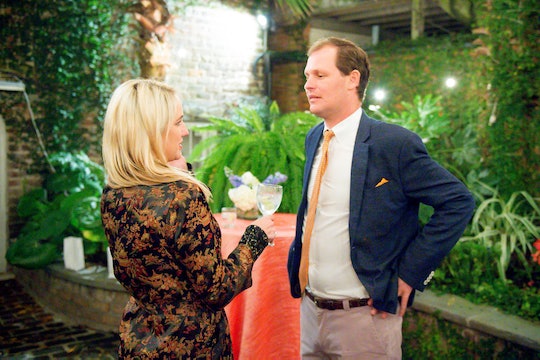 Fans Aren't So Sure About Lyle & Catherine On 'Southern Charm: Savannah'

The start of Southern Charm: Savannah Season 2 found Catherine and Lyle fresh off of a failed marriage proposal. To sum up the painful moment (there were a lot of tears), Catherine rejected Lyle's proposal because she wasn't ready for that level of commitment. Considering Catherine and Lyle's relationship was mostly long-distance and on shaky ground for the last few years, most viewers understood why Catherine said no to the romantic gesture. But fans weren't as understanding when Lyle and Catherine sort of continued on with their relationship following the awkward moment.

All season long, fans watched Lyle and Catherine struggle to define their union, a dramatic plight that included infidelity rumors and ugly accusations about each other's motives. While some Southern Charm: Savannah cast members think Catherine is using her high school boyfriend as a back-up plan, others believe Lyle is hanging onto the relationship for wealth and status. Eventually, all of the negativity caught up with Lyle and Catherine, and they decided to go their separate ways in Season 2's "Sorry Not Sorry," episode. But are the two still broken up? Judging from their Instagram accounts, the answer is: yes.

Lyle, who was once fully committed to marrying Catherine, seems to have moved on from the situation post-filming Season 2. It looks like Lyle has spent his summer hanging out with his guy friends and traveling around the United States, including a trip to Colorado's Red Rocks Park and Amphitheatre for a concert. Translation: Lyle is living his best life this summer.

It's also interesting to note the last photo Lyle shared of Catherine was in May 2017, before Season 2 started filming. Of course, it's definitely possible Lyle prefers to keep his personal life off of social media, a preference fans can't really fault him for. Carrying out a relationship in the public eye can be tough, after all.

As for Catherine, she isn't active on the 'gram, especially where it concerns Lyle. Even when the two were together, Catherine didn't flaunt their relationship to followers — in fact, there are only two photos of them together on her account. Hmm.

If Catherine and Lyle are broken up, most fans are probably relieved. Case in point: In a poll conducted by Bravo's The Daily Dish, about 92 percent of 3,295 fans answered "no" to the question, "Should Lyle and Catherine stay together?" I think it's safe to say viewers have strong doubts about Lyle and Catherine's future.

Southern Charm star Kathryn Dennis also spoke out on couple's relationship status, tweeting in July that Lyle "should move on" from the situation. And by all accounts, it appears both Lyle and Catherine have taken a few steps back from their romance.

That all being said, fans probably won't know the true status of the reality stars' relationship until they speak out on the matter. As viewers already know, both Lyle and Catherine prefer to keep their relationship issues private as possible, and I have a feeling the answer won't be revealed until Season 3 of Southern Charm: Savannah. Either way, fans can't wait to find out what the future holds for Lyle and Catherine.