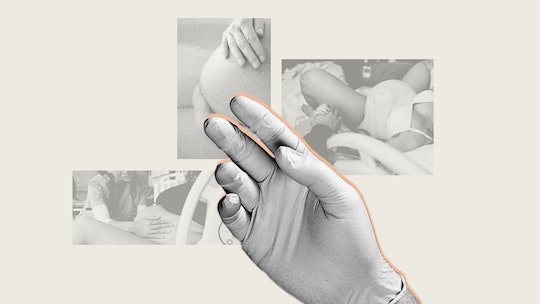 Cervical Exams During Labor — Must We Put Up With Them?

We know from watching the movies that “she’s at 10!” yelled in a delivery room means a baby’s birth is imminent. The cervical check (or vaginal exam) is taken for granted as a necessary part of the birthing process in hospitals, even as the pandemic puts a question mark over other parts of prenatal and labor care. As of 2017, 98% of births took place in a clinical setting where cervical checks are given routinely. Medical staff use their hand to feel for a number of indicators of labor progress, with a focus on the dilation of the cervix, from 0 (closed) to 10 centimeters (fully dilated).

Hearing their labor thus quantified could cause a range of reactions in the pregnant person: perhaps a triumphant fist pump that it was nearly time to push, renewed energy for the next contraction, a request for increased medication, or, at worst, a sense of personal failure or violation. However, the exam, even if done gently and with consent, can be very uncomfortable or feel intrusive.

Lynnea, a mother of two in Wakefield, Michigan, and formerly a student in a nursing program, “fantasized about an undisturbed birth.” But when she arrived at her hospital in labor, a nurse notorious for disregarding patient wishes, “stuck her hand up me. I wasn’t ready, she didn’t ask. I said, stop it hurts, she said, 'Yeah, I know.'” Since then, Lynnea has become an advocate for education on consent. “It’s hard,” she says. “You can educate yourself and each other about how cervical exams don’t predict the future, but that doesn’t stop it happening without your consent.”

Obstetricians argue in favor of the practice as a way of diagnosing problems when labor does not progress, while many birth workers argue that cervical exams are invasive and inaccurate, and can slow labor by inhibiting the laboring person: “The energy of birth is to come down and out — you’re putting a hand up and in,” says Whapio, a licensed midwife in Asheville, North Carolina, who goes by a single name. Potentially, the unwarranted exam can push patients into a state of “emotional dystocia,” where labor is arrested due to emotional rather than physiologic reasons.

“I cannot say no cervical exam should ever happen,” Whapio says. “But one just to check progress of labor? There are better ways.”

“Could you have a safe delivery without cervical exam? Yeah. But that’s like saying, could you run yellow lights and be OK? Probably. But I don’t know if that’s a good idea,” says Dr. Neel Shah, an assistant professor of obstetrics, gynecology, and reproductive biology at Harvard Medical School, and director of the Delivery Decisions Initiative at Harvard’s Ariadne Labs. Worldwide, neonatal and maternal death and injury is often caused by obstructed labor, Shah explains, so “cervical exams have a role,” but knowing how and when to use them is an art.

Cervical exams are an ancient practice. As early as the first and second centuries CE, Soranus recommended that a midwives’ hands be soft and fingers long for this purpose, as a 2017 retrospective of the practice in Obstetrics & Gynecology by Helen Feltovich, M.D., notes. For a brief time following the discovery of puerperal fever, providers performed rectal exams so as not to contaminate the vaginal canal. “The rectal approach gained rapid and wide favor but most pregnant women didn’t approve,” writes Feltovich — no surprises there — and the practice was widely discontinued in the '30s. (Some doulas confirm they have occasionally still seen this done by certain professionals.)

As early as the 1930s, British midwives also spoke out against cervical assessments, deeming them generally “unnecessary” because they did not “change outcome or speed delivery” — still a prominent perspective among midwives. An obstetrician argued that it was absolutely necessary in order to know “when to go away (and for how long) and when to stay,” which brings us up to today’s debate. The American College of Obstetrics and Gynecology’s 2014 Safe Prevention of the Primary Cesarean guidelines have softened guidance on how long a stalled labor (“labor dystocia”) can be left to progress on its own before medical intervention. The WHO, with its global perspective on birth, recommends limiting these exams to only those “necessary.”

So how do we define necessary?

For people who choose to give birth out of hospital — in a birthing center or at home — or under the care of a midwife, the frequency of the exams differs by provider and location. Some providers don’t offer exams at all unless there is a significant arrest (or prolonged delay), when they use the exam to get a more complete clinical picture and determine next steps.

Most people giving birth in a hospital expect to have these exams, and may not even know that, like everything that happens to you in a hospital (or any other birthing location), the patient has the right to ask.

The exams are routinely given by OBs in weeks leading up to labor, in triage for hospital admission, and then at provider-determined intervals as the patient moves from early to active labor, and before and during the “pushing” phase.

Most people giving birth in a hospital expect to have these exams, and may not even know that, like everything that happens to you in a hospital (or any other birthing location), the patient has the right to ask: “Is this necessary? And if so, why? Does it need to happen now?” As Barbara Christianson, a registered nurse, explains in the popular webinar she co-hosts with Cristen Pascucci of Birth Monopoly, “Informed Consent and the Vaginal Exam” that “consent is ongoing — and there should always be a conversation.” This means whether or not a laboring person has already given consent for an exam, consent should be received again prior to each subsequent one.

At worst, the cervical check, where given without consent, can constitute obstetric violence. Listening and centering the patient is especially important when caring for marginalized populations, where systemic discrimination has already negatively impacted health and birth outcomes. So what are the alternatives?

Midwives, who on average spend more time in direct contact with their laboring patients, rely on observation of the pregnant person’s behavior and emotional state. Whapio also uses what birth workers call the “leg test,” practiced by indigenous Mexican midwives, and based on the pregnant body’s changing circulatory patterns. As the cervix dilates, blood flow to the uterus increases. Accordingly, the women’s legs become increasingly cold. You can track the change in two finger increments, from the ankle to the back of the kneecap, correlating it with centimeters of dilation, Whapio explains. “As during sex,” she adds, when men’s feet can get cold due to concentration of blood volume at an erect penis and they “need to wear socks.”

There is also the diagnostic “purple line” from anus up to the lower back that “reddens” or “purples” as labor progresses. It is not present in all laboring people, but a study published in Iran Red Crescent Medical Journal showed that it appeared in 75.3% of laboring people and could be used, due to its “high sensitivity and specificity” as a noninvasive alternative.

Dr. Jacqueline Worth, an obstetrician in New York City says the exams should be individualized. “I try to check as little as possible and as often as necessary to help her have a safe vaginal birth, or to assess that what’s going on isn't safe and we need to change course. My goal: a safe vaginal birth or guidance that there is something that needs to change.”

Cervical checks don’t need to be an all-or-nothing proposition, and communication between patient and care provider helps both parties, says Shah. The “technical knowledge of the person who knows how to do a cervical exam is complementary to a [birthing] person’s lived experience,” he says.

The pregnant person should not have to “feel like a passenger on a plane on tarmac with no one telling them what is happening,” says Shah. “Information is part of agency.”

Dr. Jacqueline Worth, OB-GYN, co-founder and co-physician at Village Obstetrics and Village Maternity, and co-author of The New Rules of Pregnancy

More Like This
Pitocin Induction: What It Is & The Play-By-Play
Turns Out, You Can Dilate Pretty Far Before You Actually Go Into Labor
Can Swimming Induce Labor? Experts Weigh In
This Is How Your Water Breaks During A C-Section