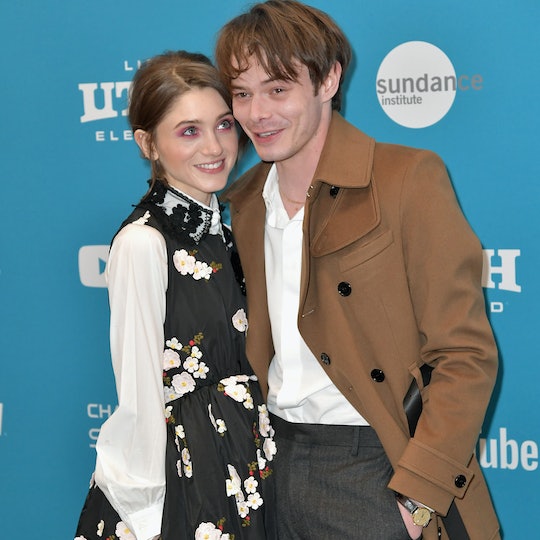 There are so many things about Stranger Things that are unbelievable — from the Demogorgon, to the alternate universes, to the fact that some characters can just disappear without a trace. But there are some things that are very believable — namely, the relationships that take place on the show. After watching Stranger Things Season 3, people are probably wondering — are Charlie Heaton and Natalia Dyer still dating? Let's just say, Nancy and Jonathan's relationship is very believable, on and off screen.

In the beginning of Season 3, viewers watched as Nancy, played by Dyer, and Jonathan, played by Heaton, began their summer in Hawkins, Indiana interning at their local newspaper. While Charlie thrived in his job, Nancy found herself struggling while working in an office with a bunch of older men refusing to take her seriously. In spite of this, the couple was happier than ever, with Jonathan having her back when she needed him the most, according to Us Weekly. But — spoiler alert — some change might be coming in Season 4. The season ended with Jonathan, his mom, and his brother Will moving away from town, and it's unclear if they will make the relationship work.

But in real life, they've certainly made things work for themselves. The couple is reportedly dating in real life, although they are super low key about it. They're not the kind to flaunt their relationship, and that is really sweet.

Although Dyer hasn't posted about Heaton on her Instagram in a long time, she did recently hint that their relationship is still going strong. In an interview with Refinery29, Dyer hinted that being in a relationship with Heaton helped her get through the very long days of shooting. "It's an interesting thing to work with somebody you go home with," she said. "It's always really fun. We're really comfortable with each other, so we can play and feel more free, and we can talk about it before."

But in spite of their chemistry on screen, the couple would rather not talk about their relationship off screen — for obvious reasons. They're young, they're in the spotlight, and a lot of attention is on them. You can't blame them for wanting to keep some things to themselves, and their relationship is one of them. In that same interview with Refinery29, Dyer explained why she won't talk about Heaton and her relationship. "That's something important to me — with my family, with my friends, I really like to keep it for me."

There you have it. Their relationship is so important to her that she would rather keep it for herself than share it with anyone else. And fans can't fault her for that, especially since they get so many great Nancy and Jonathan scenes during the show.

The couple first confirmed they were dating in December 2017, when they made their first red carpet appearance together, according to Cosmopolitan. This was a relief, because rumors had been swirling for months that the two were actually a couple (Heaton even kissed Dyer in public a month prior). But in spite of making the occasional public appearance together, they rarely talk about their relationship, for reasons that Dyer stated.

Although in February, Heaton did speak to VMan about his relationship with Dyer. "You can break down the walls with your partner," he said. "Because we work in the same industry and have similar trajectories, we've gone through it together. Sharing that does bring you closer. They understand something that no one else would."

There you have it — they like each other, they want to keep their relationship private, and they have gotten closer because they share so much time filming the show together. Thank goodness, Stranger Things has been renewed for Season 4.