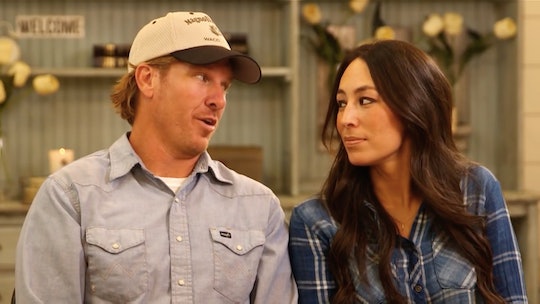 Does The End Of 'Fixer Upper' Mean Chip & Joanna Gaines Are Separating?

It's the end of an era. After five seasons filmed, numerous houses tranformed, and millions of fans gained, Fixer Upper is coming to an end. But calm your fears — it isn't because America's favorite couple is separating. I repeat, Chip and Joanna Gaines are not separating. They have just decided to focus on family and the many other facets of their sprawling empire.

The official announcement of the ending of Fixer Upper was posted to the couple's blog on Tuesday. The post reads:

It is with both sadness and expectation that we share the news that season 5 of Fixer Upper will be our last. While we are confident that this is the right choice for us, it has for sure not been an easy one to come to terms with. Our family has grown up alongside yours, and we have felt you rooting us on from the other side of the screen. How bittersweet to say goodbye to the very thing that introduced us all in the first place.

This shocking announcement is sad news for the hoards of loyal fans who have watched the Gaineses grow from a small construction and decorating team in their hometown of Waco, Texas, to international superstars. Their popular TV show on HGTV first aired in May 2013 and quickly grew to one of the networks most highly-rated shows of all time, according to People.

Despite this impressive success, TV appearances are only a small part of the Gaineses' business dealings. Aside from Fixer Upper, the couple boasts the successful retail store Magnolia Market at the Silos, which People reported has as many as 40,000 visitors a week; branded paint, rug, wallpaper, and furniture; a quarterly magazine on home repair and decor; a real estate company; a luxury vacation rental property; an upcoming restaurant; and a New York Times bestselling book. They also have a new book coming out on Oct. 12: Capital Gaines: Smart Things I Learned Doing Stupid Stuff.

Even with so much to be proud of, the Gaineses remain the down-to-earth family that America has come to love. Chip told People:

We’ve been all over the world now. But there’s something really romantic about not just saying, ‘Remember where you came from,’ but really living that out.

He also acknowledged that ending the show could hurt them financially. But even if all of their wealth and success came to an end, he said the family would be just fine. "We’ve got everything that our hearts desire," he said. "I don’t see how we could be happier."

An important part of the decision to end the show was the best interest of their four children: 12-year-old Drake, 10-year-old Ella, 9-year-old Duke, and 7-year-old Emmie Kay. Their parents never wanted them to grow up in the spotlight. Joanna said as much in the interview with People:

They’re so young, and we want to give them the chance to have a normal childhood. Family is the most important thing in the world.

Fans were expectantly saddened to hear the news that the show has come to an end and took to Twitter to express their feelings.

But others understood the reasons behind ending the show and applauded the couple's decision to always put their family first.

As sad as I am to see Fixer Upper go, there is comfort in knowing that the Gaines family will still be together and happy. This isn't the first time that the couple's marriage has been the subject of speculation. Divorce rumors cropped up earlier this month and the couple laughed them off. Joanna told People that she does her best to ignore what the tabloids have to say, and she advises fans to do the same:

I don’t do great with seeing that kind of stuff, reading into it — I just don’t know what’s going on. So then I’ll hear someone come up to me and say, ‘I hear you and Chip are getting a divorce!’ And I’ll be like, ‘Where did you hear that?’ I don’t know any of this!’ We do our due diligence in letting people know as much as we can, ‘This isn’t us. Don’t be scammed.

So, it is safe to say that the Gaines legacy will live on, even if the show will not. Their marriage is built on a solid foundation of family, faith, and friendship. For those of you dying for a Gaines fix, you can always binge watch re-runs and throw all of your money at their Target line — I know I will be.