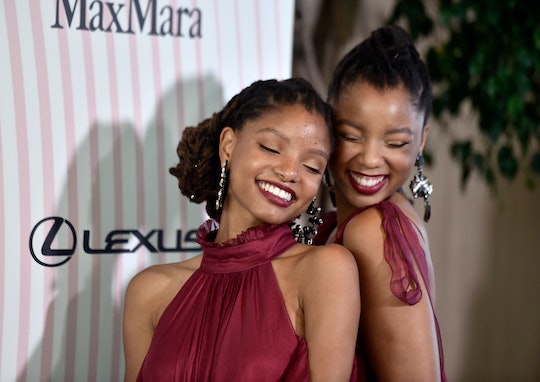 Chloe and Halle of musical duo Chloe x Halle are inseparable. They share musical albums, acting gigs, and even an Instagram account. Not to mention, they are performing at Monday night's MTV Movie & TV Awards. All that being said, casual fans of the R&B duo may be wondering: Are Chloe and Halle twins?

Chloe and Halle are very much sisters, but they are not twins. Chloe Bailey was born July 1, 1998, and her younger sister Halle Bailey was born March 27, 2000. Considering they are less than two years apart, it's no surprise that people might think they are twins. Not to mention, they play twins on grown-ish, Freeform's spinoff of black-ish. In December, Halle opened up about what it's like to play her older sister's twin.

“Me and Chloe, we feel like we’re twins all the time. Sometimes we forget that I’m the younger sister,” Halle told EW at the time. “We talk the same, we interrupt each other, and say the same thing when we’re watching shows all the time. It’s really trippy, but it’s a blast. She’s my best friend, and we just were really channeling ourselves for the characters, though it’s also our alter egos with their sassiness and attitude.”

In addition to the sisters' joint foray into the acting world on grown-ish, Chloe and Halle are best known for their music career. The sisters first showed off their musical chops on YouTube as preteens. In March 2018, Chloe told TIME:

The very first YouTube cover we ever posted was to “Best Thing I Never Had” by Beyonce. I think I was 13 years old, and my sister was 11. We were in our basement; our older sister recorded it for us. We didn’t expect much; we were happy about the first 100 views.

Pretty quickly, their YouTube videos started going viral, and Chloe x Halle appeared on The Ellen Show, Chloe told TIME. Then, in 2012, they won Radio Disney's Next BIG Thing Competition, Oh My Disney reported. Since then, they have continued making music, releasing an EP in 2013, another in 2016, and then their first full mixtape, The Two of Us, in 2017.

This past March, they finally released their first full studio album, The Kids Are Alright, Pitchfork reported. They made headlines for their hands-on approach, with Chloe producing most of the album, and with both young women working on all of the songs. Halle opened up about the importance of her and Chloe having autonomy over the album in a March interview. She told Vulture:

Our parents always taught us from a young age that we can do anything we put our minds to and not to be afraid to dive in to do something that may not be considered things for little girls to be doing. My sister is so inspiring to me when she produces. And we write all of our songs from our living room. It’s fun for us.

Their musical career received a big boost from none other than living legend Beyoncé, who has mentored them ever since she discovered their YouTube covers of her music. Halle told TIME:

Beyoncé has always relayed that same message to us: your music is ahead of its time, and it’s beautiful in that way, and we need more of that.

In fact, Chloe x Halle recently announced that they will be opening for the North American leg of Beyoncé and JAY Z'S On The Run II tour.

"We are so happy to announce that we’ll be joining the OTR II tour North American leg!!!!" Chloe x Halle wrote on Twitter, adding a huge thank you to Beyoncé and JAY-Z for "always believing in our artistry and giving us this opportunity." Until then, you'll have Chloe x Halle's performance at tonight's MTV Movie & TV Awards and The Kids Are Alright to keep you entertained.