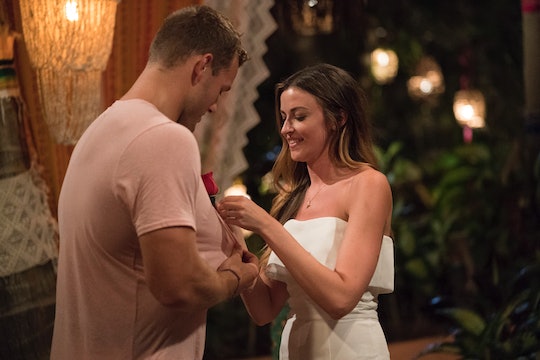 'The Bachelor' Proves Some Can Be Friends With Their Exes

With the new season of The Bachelor in full swing, there are plenty of women you'll want to know more about as Colton shows interest or disinterest (Sloth, I'm talking to you). Season 23 aside, it's hard to forget what happened just before Colton was chosen as the newest male lead. Bachelor in Paradise put Colton and ex, Tia, in the spotlight — specifically with the sudden breakup. So the question remains: are Colton and Tia still friends?

If your first thought is that Tia could never be friends with someone who broke her heart on national TV, you'd be wrong. It appears as though the two are pretty friendly with Tia even posting her support for the new Bachelor ahead of the premiere. The breakup happened last fall and caught Tia completely off guard as Colton told her he didn't feel chemistry. Um, what? However, last September, Tia spoke to People saying things were good, despite the way things played out on camera. "It’s a relief to close that chapter of my life," she said. "We’re in a good place. We’re in a solid friend zone. And it’s honestly nice to move forward instead of wanting something when it’s not there." And anyway, Tia's moved onto dating Cory Cooper, Executive Vice President at his family's steel company, Cooper Steel. Moving Colton into the friend zone after a few months of healing may have been easier than anyone thought.

Not only are Tia and Colton friends, but Tia's watching the show and live-Tweeting her thoughts. It honestly doesn't get any better than watching an ex react to her former boyfriend in real time. There's no hostility, but she doesn't miss the chance to poke fun at both Colton and The Bachelor franchise and I'm beyond grateful the internet exists for this reason.

The fact that she's able to post (with humor) shows she's moved on and truly happy for her friend, Colton. Having gone through the emotions of a televised relationship and breakup means that maybe Tia is one of the few who can support her ex with the kind of perspective he needs throughout the strange time of watching women compete for his heart. At the very least, she can relate to the contestants doing the competing, because she's been there. Regardless, it's good to see exes support each other in a positive way.

Tia wasn't the only one supporting an ex. Becca — The Bachelorette who let Colton go right after hometowns — chimed in as well saying, "Colton, as you once told me 'let's get tonight poppin." So go get em tiger! Excited to meet your women and have you take us on your lurve journey (drink). It's going to be one helluva ride, but hopefully worth every second. All my love and support to you because you deserve it #thebachelor."

Tia and Colton prove exes can be friends after the initial healing has happened — especially if both realize they weren't right together in the first place. I'm not saying that's the case with these two, but considering Tia's new lease on her love life with Cory and Colton's role as Bachelor, they're proof things work out the way they're meant to. And if not, Another Bachelor in Paradise is right around the corner.