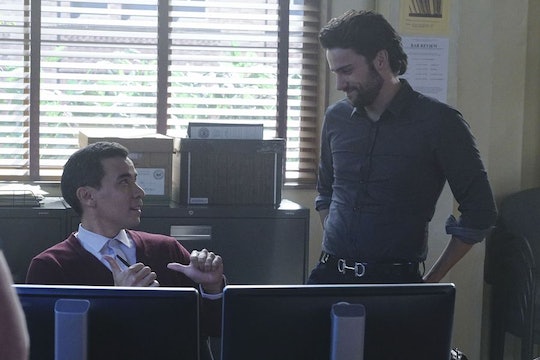 Are Connor & Oliver Back Together On 'How To Get Away With Murder'? They Might Be

Connor and Oliver, or "Coliver" if you will, have certainly had their ups and downs this season. They first broke up because Connor hooked up with someone for a case and basically claimed he didn't think he and Oliver were in an exclusive relationship. They then got back together, fell in love, and Oliver discovered he was HIV positive. From there, their love became more solid than ever until Oliver decided to lie to Connor by hiding his acceptance letter into Standford Law School. Even though Connor forgave him, Oliver believed their relationship wasn't healthy and ended it. But it seems Connor and Oliver may be back together on How to Get Away with Murder. That is, if their last encounter is any indication.

Connor and Oliver handled their break up a bit differently. While Connor started hooking up with every guy within a five mile radius, Oliver was a bit slower to get back out there. However, it wasn't that Oliver didn't want to date, it was just because of the stigma of being HIV positive that was holding him back. When Oliver finally did go out on a date with someone, Thomas, it was unlike the random hook-ups Connor was having. Oliver really liked Thomas and they made plans to go out again. When it became clear that they were going to have sex on their second date, Oliver finally confessed that he was HIV positive. And while Thomas tried to be nice about it, unfortunately, he decided that it was something he just couldn't handle right now. Poor Oliver.

After the rejection, Oliver got drunk and went to see Connor. Although Oliver admitted going to Connor was a bit selfish, especially since he was the one that ended their relationship, Connor told him it was fine. They both admitted that they miss each other. So, naturally, one thing led to another and they ended up hooking up. Later when Michaela and Asher came home, they found Connor and Oliver sitting on the couch watching Golden Girls together. Of course, Asher is excited, but Connor just calmly said he and Oliver were friends.

So does this mean Connor and Oliver are friends with benefits now or did they just not want to make a potential reunion public knowledge just yet? Fans probably won't know for sure until Thursday night's episode. For now, though, there's at least hope that Coliver may be back together once again. Let's just hope Connor's not under the sheet, otherwise this relationship will be over before it's had a chance to really get started again.