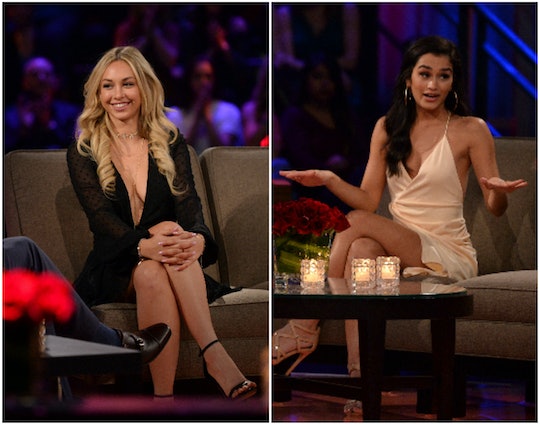 On every Bachelor Nation season, there's bound to be tension between contestants. After all, it's the nature of the show since it involves a group of people all competing for the love of one person and being cooped up in a house altogether for weeks. Of course there's drama. Typically, there's one major "feud" in the house with every group. On last season's The Bachelorette, it was between Chad Johnson and Evan Bass. This season's Bachelor featured Corinne Olympios vs. Taylor Nolan. But are Corinne and Taylor still fighting on The Bachelor Women Tell All reunion special?

Almost immediately upon her introduction, Corinne was set up as the season's so-called "villain." Between her privileged, nanny-having background, her seemingly endless supply of quippy one-liners, and her devil-may-care behavior, she was primed to be the subject of much ire for viewers and her fellow contestants alike. There's no doubt that Corinne ended up evolving beyond that one-note persona, lasting much longer than anyone suspected she would. But for Taylor, who left the competition when Corinne was still at peak-Corinne, her volatile relationship with the Miami business owner ended on a very sour note during the show's most uncomfortable two-on-one date ever.

To very briefly recap for those who blocked that mid-season awkwardness from their minds: At the height of the drama between them, the show sent them on a two-on-one date to the middle of a New Orleans swamp. At the end of it, Nick and Corinne jetted away on a boat, leaving Taylor behind in the swamp.

And after a run-in with some voodoo swamp women, Taylor interrupted the remainder of Nick and Corinne's date to give him a piece of her mind, still attempting to get him to "see the light" re: Corinne.

Obviously, nothing changed – Taylor still went home, and Corinne defied all the odds and made it all the way to the final four before being sent home in a surprisingly emotional rose ceremony after hometowns last week.

But are either Corinne or Taylor still holding a grudge? Social media accounts for both women have been free of any noticeable shade about one other, but that doesn't necessarily mean that they're on good terms — it might just mean that they're keeping it all off-line. And one thing's for sure — nothing about their clash seemed fake. They seemed like two women who just fundamentally didn't get along, and probably never would have, regardless of whether they were competing for the same guy's heart on national television.

The preview for Monday night's Women Tell All special highlights the Corinne/Taylor drama. Based on photos released to press for the show, both women will be attending the reunion. In an Access Hollywood interview with Olivia Caridi after the Women Tell All taping, Corinne was clearly still not thrilled with Taylor, but seemed content to put it all behind her. Olivia also mentioned that she and Taylor had "hugged it out," and Corinne confirmed that she considers the hatchet buried in the sense that she simply doesn't want to talk or hear about her feud with Taylor after this.

So it seems like, though the two women aren't actively feuding anymore, it's not like they're going to be besties anytime soon. Understandable. Here's hoping they don't wind up crossing paths on Bachelor in Paradise. (Oh, who am I kidding? I'm totally hoping for that.)