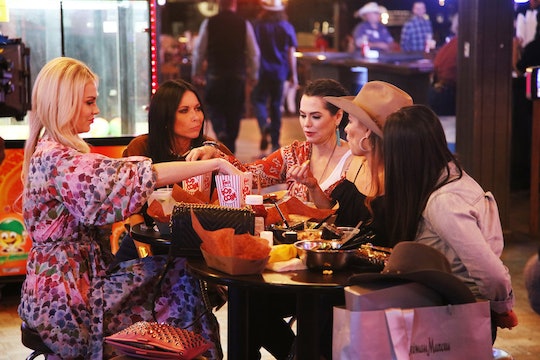 Real Housewives of Dallas is back on Bravo and one of the big storylines taking shape this year seems to be D'Andra Simmons coming into herself after a lifetime of being groomed for Dallas high society. Of course, that's causing friction between D'Andra and her society friends Kameron Westcott and LeeAnne Locken. So fans may be wondering: are D'Andra Simmons and LeeAnne Locken still friends after RHOD? D'Andra told Us Weekly last month that the two are taking some space from each other after Season 3.

"We’re just kind of taking a break from our friendship," she said, mentioning that they still see each other casually in social settings. "We’ve had a lot of different things happen with regards to our relationship this year and I think we just needed some breathing room."

Viewers already saw cracks start to form in the friendship during the season's first group trip to Colorado where they stayed at Kameron's family home. D'Andra opens up to Brandi Redmond about feeling inauthentic performing conservatism for the sake of not disgracing her powerful family, and the pair bond over the fact that Brandi has always been as, uh, behaviorally free as she wants to be. D'Andra seems envious of that and clearly looks to Brandi as an example of how to be more unapologetically herself. LeeAnne clearly feels differently.

And according to D'Andra, tensions between her and LeeAnne only mount as the season continues. She continued in her Us Weekly interview:

LeeAnne and I have a little altercation. I call it a little altercation. That was in Copenhagen. We had a disagreement. And then also [Kameron Westcott] and I. We were having some problems this year as well, which is surprising. Really surprised me. Completely surprised me. So, that’s...I gotta fight with everybody this year. I guess LeeAnne passed that wand over to me.

Of course, complicating this already complicated dynamic is the fact that LeeAnne and Brandi have long-standing, on-again off-again beef. Every season, it seems, they start out with a cathartic "let's make a fresh start" conversation, only to get mired in the same old arguments. Neither of them, it seems, are truly over their initial friendship betrayals and so the issues keep bubbling up. So now, even if LeeAnne's concerns about D'Andra's budding friendship with Brandi are coming from a good place, they seem, well, petty.

"I wasn’t going to say something to you because I don’t want you to be like, 'You just don’t want Brandi and I to be friends,' which is not the case. I just don’t want you to think I have ulterior motives," LeeAnne said in a recent episode, according to People. "But she knows that you and I have deep foundations and she’s going to go to use that foundation to get to me. And that’s what scares me with her."

Luckily, it seems like D'Andra is remaining true to finding herself, even if it means taking a break from her friendship with LeeAnne right now.