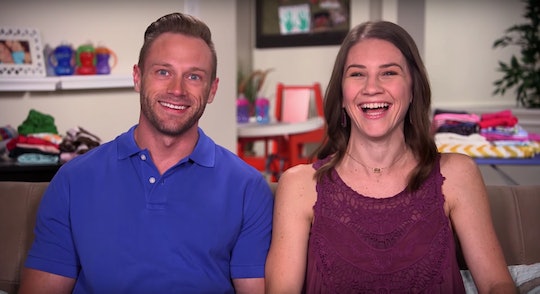 When you're busy trying to raise five 3-year-old quintuplets, simple things like posting on Instagram become five times more difficult. But that hasn't stopped Danielle and Adam Busby from sharing their unique family life with fans on their TLC reality show OutDaughtered. That being said, fans of the show might be wondering: Are Danielle and Adam Busby on social media?

The Busbys first entered the public eye in April 2015, when Danielle gave birth to a set of quintuplets, as KTLA5 reported at the time. The Busby quints were the first all-girl quintuplets born in the United States, as well as the first all-girl quintuplets born on Earth since 1969. To keep the world in the loop on their quints, Adam and Danielle began to write a blog, called “It’s a Buzz World," which they still update. Not only did that blog branch out into OutDaughtered, but the Busbys also started several social media accounts to document the quints — Ava Lane, Hazel Grace, Olivia Marie, Parker Kate, and Riley Paige — and, of course, Blayke Louise, their 7-year-old daughter.

That blog eventually turned into various social media accounts for It's A Buzz World. Danielle and Adam have Instagram, Twitter, Facebook, YouTube, and even Google Plus accounts, all under the name It's A Buzz World. The couple typically uses these accounts to share family photos as well as promote OutDaughtered.

He has used Instagram to express love for his wife on multiple occasions. When the couple celebrated their 12th wedding anniversary this summer, he posted a gorgeous photo of them, captioning it:

Man, she is beautiful. Was able to get this photo in between snapping photos of Kayla and Luke’s Wedding festivities last night. Married her 12 years ago and love her more and more each day. I’ll pursue her till i take my last breath.

Danielle's Instagram account is a bit more personal. In addition to sharing photos of her daughters, Danielle sometimes posts pictures and videos with her husband, with friends, and on her own.

On Adam's birthday this year, Danielle celebrated with a cute picture of the couple. "Happy Birthday to this stud of mine. I am so proud of you and I love you more than words. 🎂🍻," she captioned the shot.

Like her husband, Danielle mostly uses Twitter to promote OutDaughtered. She even live-tweets new episodes of the show they air on TLC sometimes.

Even though the Busbys star in their own reality show, they have not stopped making vlogs for the It's A Buzz World YouTube channel. Just last month, they posted a 15-minute long vlog of the family's bowling outing for Father's Day.

And earlier this year, Danielle and Adam posted a hilarious minute-long video of the family during dinnertime. In the clip, Riley was hysterically crying because she wanted to eat what she thought was a lemon slice, but was actually an uncooked slice of a yellow squash. She kept crying until Adam finally gave in and handed her a slice, which she promptly took a bite of and then spit out. That'll teach her!

On top of all of the Busbys' personal accounts, there are also official social media accounts for OutDaughtered. The show's Instagram and Facebook pages both mostly promote the show by sharing clips from upcoming episodes.

Basically, the Busbys are all over social media, with plenty of quint content to go around.