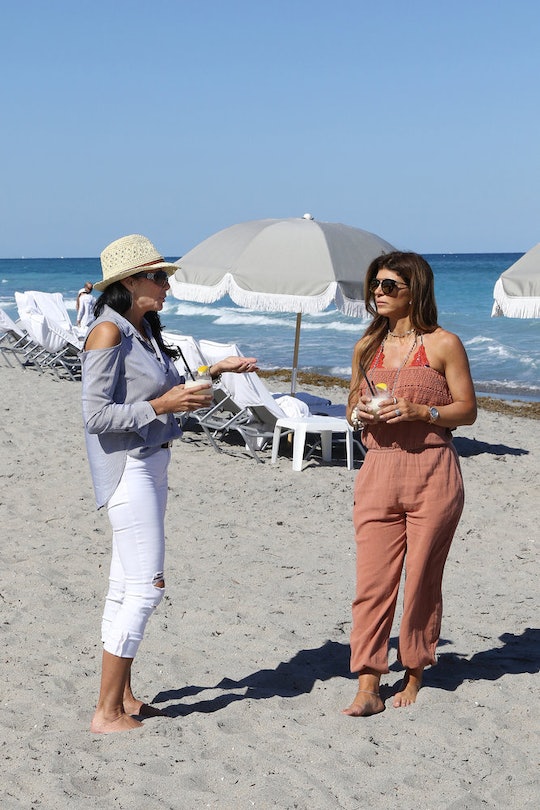 This season, Danielle Staub is returning to the Real Housewives of New Jersey. She was an original cast member who left the show in the midst of some major drama just after two seasons. So is she walking into chaos again or are Danielle Staub and Teresa Giudice friends on RHONJ? Surprisingly, it seems like the two have made nice and have each others' backs this year. I only say surprisingly because let's face it: Teresa and Danielle have a super rocky history on this show.

During the epic Season 1 finale, Teresa said some awful things about Danielle and then flipped that, seriously iconic, table on her. In Season 2, Jacqueline Laurita's daughter yanked Danielle's hair extensions out. Simply: Things got messy last time around. Danielle said back in 2010 that she had to leave the show. "I'm way too good for this. They have used me about as much as I can be used," she told Us Weekly at the time. Danielle added:

I mean, what's left for [the other castmates]? To kill me? Bravo seems to be glorifying their behavior. And I think it's almost like telling children to behave poorly at school, 'It's OK.'

Danielle coming back was apparently Teresa's idea. After the reunion, Teresa floated her old frenemy's name, especially since Danielle had been really nice on social media towards her. An anonymous source told Entertainment Tonight :

Danielle has been very complimentary to Teresa on social media since her legal issues and jail time. So, after the reunion, Teresa thought to reach out to Danielle to say hi. Teresa has really turned over a new leaf and figured, 'Why not? Life is too short to hold grudges.' And she will definitely be a great ally for Teresa to have.

Teresa said she got the idea from Andy Cohen, who mentioned Danielle during the last reunion. While on Watch What Happens Live she told Cohen:

You started it. So then I just DMed her and right away she called me back. We were texting back and forth, and I said, 'Do you do yoga?' She's like, 'I love yoga.' I said, 'So, I'll come to one of the yoga places that you go to.'

Maybe Teresa really has changed — coming to meet someone else on their turf is a pretty big deal. The two apparently had a great time hanging out before anything was official and did yoga together. Afterwards, they went to Jamba Juice and dished about life. Danielle told The Daily Dish:

It takes a really big person to own up to your mistakes. I forgive. You don't ever forget, but when someone apologizes I have always been able to move on from it as long as I believe it's genuine. She's really grown as a person.

Teresa feels the same way about Danielle, saying, "I feel like she never tried to hurt me in any way, like maliciously, and I just wanted her to know that." Life really is too short to stay angry and yell at your friends anyway, right?

But that doesn't mean that there isn't going to be any drama on this season of The Real Housewives. Luckily for Danielle and Teresa's rekindled friendship, Jackie won't be returning this season since she was on the outs with too many cast members, according to Page Six.

If Danielle and Teresa can keep the peace this season, then literally anything is possible. We're counting on you, ladies.