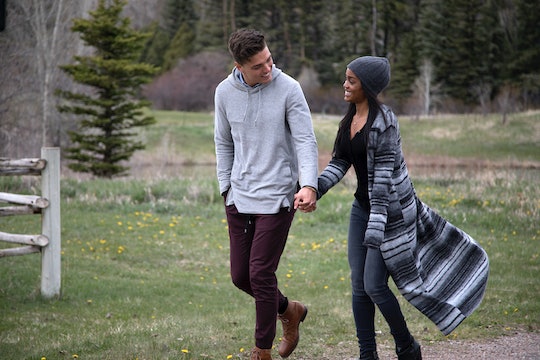 Despite the fun Rachel and Dean had together on The Bachelorette, it may not have initially seemed like they would go all the way down the aisle together at the end of it all. Sure, Dean was nice and funny (and relatively drama-free), but it didn't seem like they connected on a deeper level. That was until Dean opened up to Rachel on a one-on-one date about his complicated family situation and unresolved issues with his father. Rachel got to see another side to him, one with a little more depth. Is it possible their relationship will continue to deepen? Are Dean and Rachel engaged on The Bachelorette?

Rachel definitely ends the season engaged, but it's still too early to say which of her final four guys is the one she chooses. The only concrete clue from Rachel herself is a vague one; she told The Hollywood Reporter that, "If I had a list, [her fiancé] would check everything off." All that really says is that the guy Rachel picks is perfect for her, but a case could reasonably be made for any of the remaining men. Dean and Rachel seem to have grown closer (and watching her comfort him was undeniably sweet, I have to admit), but are there any clues on social media that he's the one who gets down on one knee?

Dean is definitely free with the compliments whenever he talks about Rachel on social media. He's posted more than a few adorable pictures of them to his Instagram account, but that could easily be explained as promo for the show. All contestants tend to post at least a few cute screen grabs as the season unfolds. What's a little bit more notable are the very thoughtful, personal shout-outs Dean has given Rachel for helping him open up about his mom.

On one picture of the two of them kissing, Dean writes, "Thank you: for understanding, for being there, for allowing us to be vulnerable, for listening. @therachelindsay really is the most amazing woman." Obviously it's a truth universally acknowledged that Rachel is amazing, but it's also clear that what Rachel had to say really meant a lot to Dean. He thanked her again in another Instagram post dedicating to his mom, saying, "I have so much love and respect for Rachel (and @bacheloretteabc) for allowing me to share my story and, most importantly, honor my mother, Debbie."

These posts don't necessarily mean that Dean and Rachel get engaged, of course. They could have parted on amicable terms, though it's still nice to see that Dean was so genuinely touched by the experience that he had to make a few posts about it. If they did end up together, it doesn't seem like Dean would be a bad choice at all. No matter what happened on the show, his connection with Rachel appears to have really meant something to him.