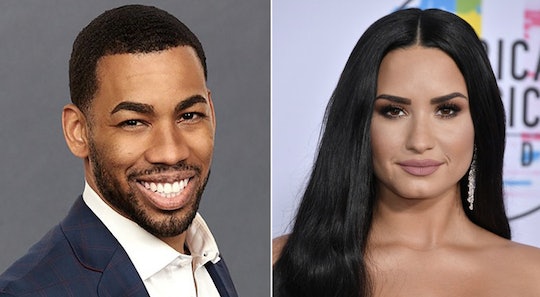 For a minute now, Bachelor Nation fans have wondered whether Demi Lovato and Mike from Bachelor In Paradise are dating. Although the duo haven't made an official announcement yet, reports suggest they have already gone out on a date. Gasp.

The singer, 27, and reality star, 31, might not seem like a surprising match (it kind of came out of nowhere, no?), but there has reportedly been been an online flirtation going on for a while now, according to ET Online. And for Bachelor Nation fans like me, this news is incredibly interesting, especially since many might recall when Lovato made a surprise appearance on Hannah Brown's recent season after becoming fast friends with the Bachelorette star.

Hannah said at the time, according to ET Online: "I definitely have the hookup for Demi, if she wants to be with Mike...I would give her my blessing."

Mike appreciated Hannah's public show of support, stating in response to her shoutout, according to OK! magazine: "I'm just really glad to have somebody in my corner that's so supportive that's been through this type of public eye in a much larger capacity...I'm just really thankful for her."

Now that Mike has moved on from The Bachelorette and Bachelor in Paradise, he might be looking to settle down with Lovato. Johnson, who came onto to the show as a financial portfolio manager from Texas, has reportedly taken the "Heart Attack" singer out in real life, according to People.

"They're having fun and getting to know each other," a source told the outlet. “They’ve been talking privately for a bit and hanging out.” Trés interesting.

Oh, and did I mention how their supposed date? "Everything went well on the date," a source told ET Online.

Lovato's Instagram seems to support this development, with Johnson commenting on a recent pic of the singer posing for an unedited bikini shot. In the comments section of Lovato's post, in which she and discussed her journey to self-acceptance and body positivity, Johnson wrote, "Look at me like that again...love yaself."

Yep, it sure sounds to me like something is brewing here.

Not to mention, Lovato has been open about her crush on Johnson, revealing at The Bachelorette's live finale that her mom also approved of the former reality star, according to POPSUGAR. Parental approval is always good to hear, and I can see why Lovato's mother is reportedly taken with Johnson.

Another reason this might really be a thing? Johnson chimed in on Tyler Cameron's social media recently about "double dating" now that he's supposedly dating Gigi Hadid, according to People. So my best guess is that the relationship between Johnson and Lovato is off to a good start. But don't expect him to hand out his final rose to the singer just yet... this coupling is still unconfirmed, y'all.

In my humble opinion, it appears Johnson has the maturity Lovato might be looking for. And i'm excited to see where things go from here, although I'm not hopeful the two will spill the beans anytime soon. It looks like they want to keep this private for now, which I totally understand. The pair has had their fair share of fame, and I assume they want to enjoy this time behind closed doors. Stay tuned!