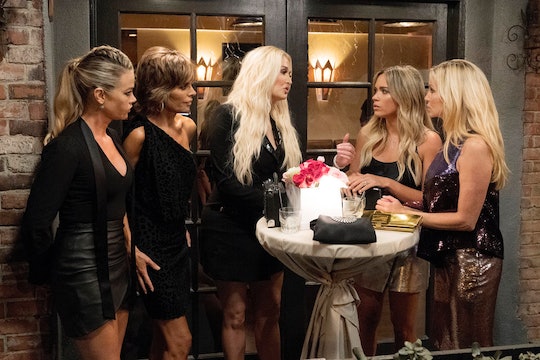 Denise Richards Has Her First Fight On 'RHOBH'

Denise Richards has managed to stay neutral in Real Housewives of Beverly Hills squabbles thus far, but every freshman Housewife has to go into battle eventually, and the midseason trailer shows Denise sparring with Camille Grammer. Considering their recent cocktail date, during which Camille smack-talked every other castmate in great detail while Denise awkwardly smiled and nodded, viewers may be wondering if Denise Richards and Camille Grammer are friends. It looks like this pair is headed for a meltdown.

The midseason trailer shows things kicking off civilly enough; in a conversation with Camille, Denise starts to say, "You know—" but Camille cuts her off at the pass.

"No I don’t know, Denise, so back off!" Camille snaps, escalating what sounded like a strongly worded, but ultimately polite conversation into something more heated.

"No. You f***ing back off," Denise retorts, in what may be her prickliest moment on the show yet.

It isn't clear from the trailer what their feud is over, but viewers do know that Camille recently made Denise super uncomfortable by unleashing a deluge of petty complaints about her castmates during a night out to drinks. Denise didn't really comment on any of it in the moment, so maybe that's been bubbling beneath the surface of their relationship.

"Camille just can't shut her pie-hole and it makes me feel like, one, it's gonna be me next," Denise explains in a confessional ahead of the RV trip. "It puts me in a very compromising position because I love all these ladies and I don't want to tell them what she's saying, because I don't want to have everything f*cking blow up."

It's possible that what causes the rift between Camille and Denise is the escalation of Camille's backchannel shade and Denise's growing discomfort with it in the face of trying to make new friends.

On the other hand, the fact that neither Camille nor Denise has commented on the state of their friendship may suggest that things are not exactly copacetic between them. For example, Denise was quick to squash rumors that she and Dorit had a fight at her wedding before Season 9 even premiered. The fact that she went to such lengths to set the record straight at the mere hint of a feud suggests that she'd be on a quest to clear things up now if the show blew a feud between her and Camille out of proportion. This could be a case of neither Housewife having anything nice to say, so they're both choosing to not say anything at all.