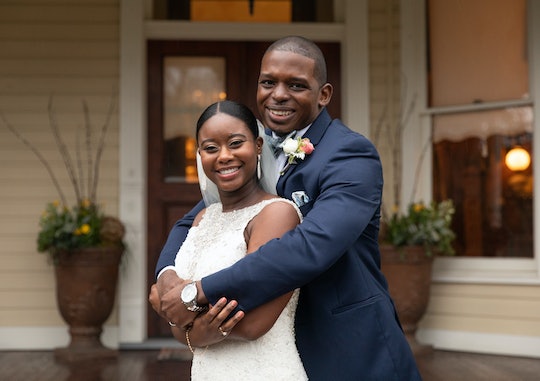 Deonna & Greg Could Be Another 'Married At First Sight' Power Couple

Greg and Deonna seemed like a good fit from the start on Married at First Sight Season 9. They were driven, they had a lot in common, and they were both very religious. They also had a spark upon meeting at the altar. But are Deonna and Greg still together after Married at First Sight? An auspicious introduction doesn't necessarily mean a solid marriage will follow.

It's a little too early in the season to make a prediction about Greg and Deonna's relationship. Filming may have concluded, but that doesn't mean there are spoilers abounding out there. Social media is usually the best place for updates, but Deonna doesn't appear to have an Instagram and Greg's account is private. He does have a public Facebook page, but the only thing on it is a picture of a motorcycle. His profile photo doesn't have any secret clues, either, though he is wearing a t-shirt that proclaims "I [Heart] Math." So at least we know Greg and Math are still going strong.

Right now, it's impossible to tell if Greg and Deonna will make the choice to stick it out on Decision Day. But there have been several signs that they're well-matched, which could bode well for the relationship.

The show's experts are feeling very confident about having paired up Greg and Deonna. Pastor Cal Roberson told The New York Post that they were a "match made in heaven because they both share strong core values." He went on to say, "They both have educational compatibility, motivational compatibility, and they have spiritual compatibility. I believe they are going to be our next power couple."

On paper, it seems like Deonna and Greg are basically perfect for each other. They're on the same page when it comes to all the major areas of their lives. Things might be different once they're living together full time, but it's easy to understand why the experts put these two people together in the first place.

Previous power couples sat down with E! News to share their theories about the Season 9 couples, and many of them chose Deonna and Greg as the ones most likely to succeed. Season 5's Ashley Petta (still married to Anthony D'Amico) thought they were both "very down to earth and level headed," which seemed like a positive. Bobby and Danielle Dodd from Season 7 were also Team Deonna and Greg (Deog? Greonna?), saying that they "noticed right away Deonna and Greg are aligned on so many levels."

Kristine Killingsworth, who married Keith Dewar in Season 8, also thought they were a "solid couple." Her co-stars from that season, AJ Vollmoeller and Stephanie Sersen, agreed. Not only did they have a lot in common, their personalities seemed to balance out nicely. "Greg seems very respectful and Deonna can bring the excitement that Greg asked for," AJ and Stephanie explained.

There's always a chance that Greg and Deonna won't work — maybe they hate living together, or the chemistry just isn't right — but at the moment, it looks like everyone is rooting for them to succeed.