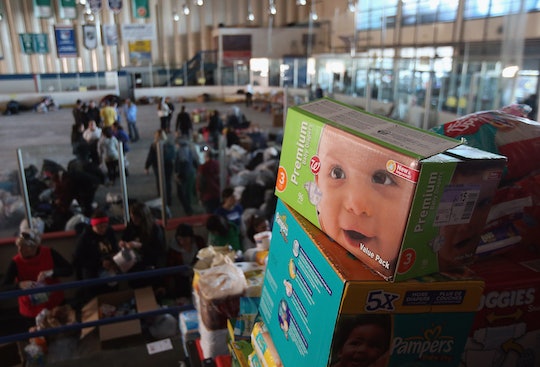 Why Diapers Are More Expensive In Some States

When planning for a baby, parents will look into the costs of raising a child to make sure they've got what it takes in order to cover expenses like pregnancy check-ups, day-of delivery bills, and continuing daycare for their infant. Often, during those rather eye-opening investigations, they'll discover that the costs of raising a child can vary widely depending on what state they live in, with daycare in areas like the District of Columbia and Massachusetts sucking bank accounts dry. But are other, smaller expenses, like diapers, more expensive in some states than others, too?

While independent stores may vary in their costs, most chains — think Walmart or Target — offer buyers in all states the same price. However, there's one important variable that changes state to state and impacts diapers prices, and that's whether states tax diapers. According to CNBC, seven states already exempt diapers from sales or use taxes, including Rhode Island, Vermont, New Jersey, New York, Pennsylvania, Minnesota, and Massachusetts.

Sales taxes might not seem like a huge chunk of change — but in some states, like Louisiana, combined state and local sales taxes can reach nearly 10 percent, according to the Tax Foundation. When parents are spending an average of nearly $1,000 per child on diapers a year, that sales tax adds up. For low-income families especially, it can eat up much-needed cash.

"They’re not a luxury item; they should not be taxed," Meghan Fielder, a mom who helps ensure diaper banks in Palm Beach, Florida stay stocked up, told CBS on Wednesday. "It is really unacceptable that we would still call these a luxury item."

Sales taxes are a great way to ensure that people's deep desire for a new PlayStation or Givenchy purse help the state, as well — but diapers are a necessary and continuing need for parents, and shouldn't be treated as an optional luxury that families indulge in. If you're in a state where a diaper tax exemption bill is being considered, make sure to write or call your representative and let them know how you feel about diaper taxes.