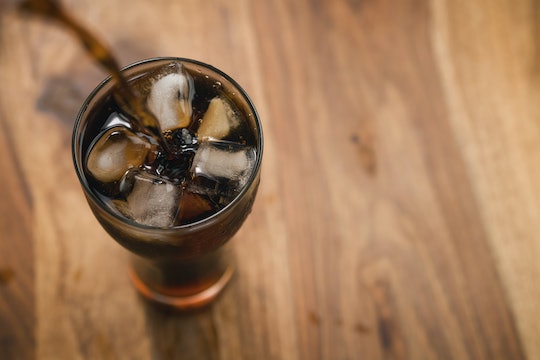 Here's What You Need To Know About Diet Sodas During Pregnancy

I want to believe in diet sodas, I really do. Especially in pregnancy, when women are watching their weight to avoid a host of medical problems, these lower-calorie drinks might sound like a fine solution — but what about those artificial sweeteners they contain? You know, the ones with the scary-sounding names like aspartame, acesulfame, and sucralose. Are diet sodas safe for pregnancy? Look, they're not rat poison — diet drinks are approved by the U.S. Food and Drug Administration (FDA) for human consumption, after all. Still, studies are increasingly finding problems with these low-calorie, sugary drinks.

By now, everyone knows that regular soft drinks are terrible for you, primarily because they do your waistline no favors. Enter diet sodas. While drinks like Coke Zero do save you calories by replacing sugar with artificial sweeteners, that doesn't necessarily mean they're good for you. As Harvard Health reported, studies increasingly show that diet drinks confuse your body by messing with your metabolism, your sense of taste, and even your mind. (Ever get the large fry just because your soda is "diet?") In fact, one study showed that drinking just one diet soda per day increased your risk of developing Type 2 diabetes by a whopping 67 percent. But can they hurt your pregnancy? The answer is maybe.

Recently, a large Danish study showed that women who drink at least one artificially-sweetened drink per day were more likely to go into labor prematurely. However, as Dr. Bradley Price, an OB-GYN from Austin, Texas, explains to Romper, the risk of preterm labor among diet-soda drinkers only increased from 5 to 6 percent. "So yes, it did go up a little bit," he says. "But that’s actually really good compared to the U.S. Our preterm labor rate . . . is around 10 percent overall, and 14 percent in African-American women. So there’s a lot more going on than just sweeteners."

Price also pointed to an English study that showed that women who drink regular soda actually had a higher preterm labor rate than their diet soda drinking counterparts. With preterm labor especially, causation and correlation can be difficult to untangle.

"The problem with sweetener is that there’s some evidence that it actually raises your risk for a metabolic syndrome," like diabetes or high blood pressure, says Price. As Scientific American reported, the effect may be due in part to the adverse effect of artificial sweeteners on gut bacteria.

But soda — whether diet or regular — contains one other troubling ingredient that cautious pregnant people might want to look out for: phosphorus. According to The Nest, phosphoric acid is one ingredient that gives cola its zippy taste. As Price explains, phosphorus can "slightly decrease calcium absorption, but by and large calcium's not a big issue — it's not one of the key nutritional deficiencies in pregnancy."

The key pregnancy deficiencies you should watch out for are iron and folate — they're not impacted by diet soda, but they are two really good reasons to take your prenatal vitamin daily, says Price. He suggests taking a non-generic prescription prenatal vitamin at breakfast, preferably with a glass of orange juice to aid iron absorption.

In the end, there's no reason to panic if you drink the occasional diet soda during your pregnancy — I mean, it's tough out there, right? Studies are ferreting out various troubling effects of artificial sweeteners, but they're not arsenic. For Price, the biggest issue with diet drinks is simply that they're a lousy food choice. Pregnant or not, he tells his patients to opt instead for water, reduced-fat milk, and small amounts of coffee, tea, and fruit juice for optimal health.