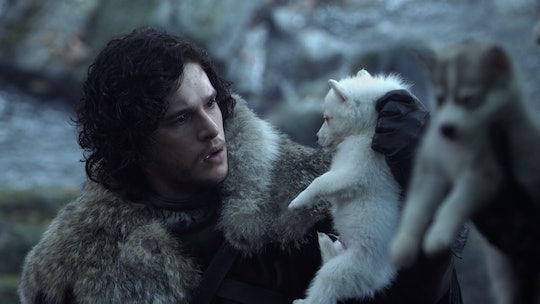 Are Dire Wolves Connected To Their Owners On 'Game Of Thrones'? This Could Explain A Lot

The Season 6 premiere of Game of Thrones opened up with the dark, windy courtyard of Castle Black, the only sound being Ghost's sadder than sad howl as Jon Snow lay lifeless in a pile of blood stained snow. It seemed like the entire time Jon Snow was dead, Ghost was almost just as devoid of life. It wasn't until Jon came back in Episode 2 that Ghost opened his eyes and lifted his head, so is Jon Snow's life tied to Ghost's life? It's unclear if Ghost was actually dead while Jon Snow's lifeless body lay on the cold hard slab, but Ghost was always by Jon's side, making it clear that even if their lives aren't necessarily linked, their connection goes beyond a man and his best friend.

We all know that warging is nothing new to the Stark family, and especially so in the Stark kids. By warging, I mean of course transferring to another living being, much like we've seen Bran do with both dire wolves. And while Bran is the only Stark we've actually seen do this, it is believed to be a universal Stark gift, and in the books, Jon Snow has actually warged into Ghost quite a bit, so that idea isn't too far off.

If Jon's life is tired directly to Ghost's, we haven't heard it yet, but we do know that dire wolves are directly tied to Starks, period. And all of Ghost's behavior during Jon's death seems to add up to the possibility of Jon actually warging to Ghost's body when he died. If you remember from the Season 5 Game of Thrones finale, as soon as Jon died, we get a glimpse of Ghost scratching at his cage, freaking out. This could very well have been the moment that Jon warged into him, if he did indeed do it.

One Redditor even claimed to have noticed Jon's eyes turn the telltale milky white of warging once he died. This would lend further proof to the idea that Jon and Ghost are even more strongly linked than simply being connected as Stark and dire wolf. And right before Jon came back to life, Ghost was suddenly much more responsive, his eyes open and head lifting a bit. There is also the little matter of Ghost never ever leaving Jon's side, even after he died.

Chalk it up to Jon wanting to stay close to his human body as he was "inside" of Ghost, or consider it to just be an example of Ghost's loyalty to his master Stark. Either way, Jon Snow and Ghost have a special bond and Ghost isn't going anywhere.