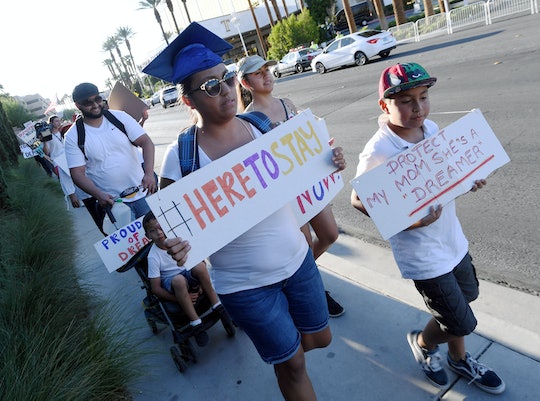 On Sept. 5, Attorney General Jeff Sessions announced plans to end the Deferred Action for Childhood Arrivals (DACA) program. Among the reasons cited for repeal was a belief that the program “denied jobs to hundreds of thousands of Americans by allowing those same jobs to go to illegal aliens.” But the problem with that statement, according to analysis in the Washington Post and elsewhere, is that the data on DACA recipients (also called DREAMers, after the DREAM Act that would offer them permanent legal protection) proves otherwise. Are DREAMers taking jobs from U.S. citizens? According to the analysis, it’s a myth in more ways than one.

Put in place in 2015 by executive order, DACA grants protection from deportation to more than 800,000 undocumented immigrants who came to the United States as children (meaning many of them didn't have much choice in the matter).The move to repeal the Obama-era action made good on one of the major promises then-candidate Donald Trump made to his supporters during his presidential campaign. Pitting unemployed U.S. workers against undocumented immigrants was one of President Trump’s strongest talking points to far right supporters while on the campaign trail. But now, as president, Trump has made the rhetoric a key position held and defended by his White House.

Not only did Sessions make the claim in his speech announcing repeal, White House Press Secretary Sarah Huckabee Sanders repeated it during the daily press briefing that afternoon, according to the official transcript posted on WhiteHouse.gov:

But that isn’t exactly accurate. For one thing, DACA recipients and unemployed U.S. workers aren’t interchangeable. The nonpartisan policy research group Econofact recently released an analysis of the economic impact of repealing DACA that reveals the differences in the two groups. The program itself requires that an applicant have at least a high school diploma in order to qualify. But the majority of DREAMers have gone way beyond that. Some 36 percent of DREAMers age 25 years or older have a bachelor's degree or higher, according to that analysis. And, of those who were still in school when surveyed for the analysis, more than 70 percent were pursuing a bachelor's degree or higher.

By contrast, Econofact reported, the number of unemployed Americans with similar skills is currently low. For example, 65 percent of clerical positions surveyed by Econofact required a college degree, but only 14 percent of applicants had higher education.

Speaking to the Post, Douglas Holtz-Eakin, president of the American Action Forum and former adviser to Sen. John McCain explained that removing DACA recipients’ legal working status won’t make Americans suddenly more skilled. The unemployed U.S. workers would have to have the same education and experience as DREAMers in order to be competitive. “And if they do [have those skills],” he said, “it begs the question as to why they don’t have those jobs in the first place.”

But there’s another reason this myth about DACA recipients needs to go away. It assumes that undocumented workers — specifically Latinos — are only qualified for the least skilled jobs the U.S. has to offer. And that just any American worker could easily step in and fill those jobs just by being, well American. That’s not only unsound reasoning, it’s blatantly offensive.

Contrary to the rhetoric, independent analysis has shown time and again that immigration actually helps the U.S. economy by boosting productivity and by creating opportunities for more jobs and workers. Pitting immigrants against other marginalized groups only serves to generate anger and resentment. It definitely won’t generate more jobs.