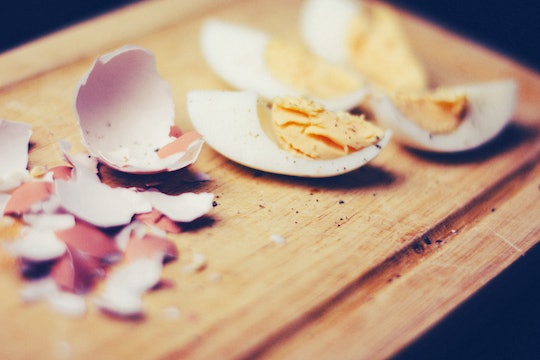 When kids get in the kitchen, things go awry — especially when you let a kid crack an egg. Parents and baby sitters alike can attest that they've more than likely found a bit of eggshell in their brownies or cake batter at some point or another. Yes, eggshells are a common surprise found in foods that are prepared by children — but are eggshells safe to eat and could they actually be healthy for your kid?

While eggshells normally get discarded for their tastier insides, they shouldn't have to be put to waste. And though people are more likely to throw their egg shells in the trash can than back in their fried egg, they might want to rethink again. Eggshells are supposedly pretty safe to eat and are a great source of dietary calcium, according to The New York Times; They even provide many benefits for bone health, according to some scientists.

Eggshells are pretty powerful in nutrients — hiding their strength behind their own fragility. One 2013 Argentinian study found that just half of one egg shell could provide the amount of calcium needed by adult human beingsfor one day. According to the Mayo Clinic, adults need around 1,000 to 1,200 mg of calcium a day. This is in comparison to children, who need around 700 to 1,300 mg a day depending on their age.

An eggshell has about two grams of protein in it, according to Business Insider. To put this into perspective, there are about 300 mg of calcium in a cup of 1 percent milk and 100 mg of calcium in one L'il Critters Calcium Gummy Bear. Sure, you can give your kids calcium through these other, more common methods. But if your family is on an all-natural kick or you just want to scrap the gummy vitamin addiction altogether, eating some eggshell powder might be a suitable alternative.

But before you start crunching on eggshells instead of potato chips, the eggshells must be cleaned first. According to The Huffington Post, eggshells are covered in bacteria and could carry Salmonella. To eliminate the bacteria, according to Live Strong, eggshells should be boiled and then oven-dried in a 140 degree oven. It is recommended that eggshells be turned into a powder to add to things like pastas and pizza doughs, according to Business Insider, instead of eating them whole (probably not too appealing that way, anyway).

While eggshells might not become a dietary staple in your household, they are technically safe to eat. Think of it this way: The next time your kid accidentally throws an eggshell in your baking project, it doesnt mean you need to throw out that the whole pan of brownies — think of it, instead, as getting your daily calcium serving. (Or maybe don't — but use the opportunity to teach your child about edible eggshells anyway.)