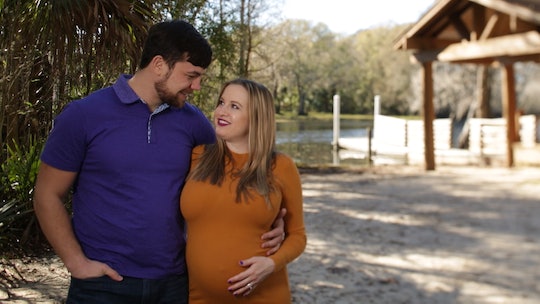 Elizabeth & Andrei Found Their Happily Ever After On '90 Day Fiance'

Elizabeth Potthast and Andrei Castravet first became a part of the 90 Day Fiancé family back in Season 5. Elizabeth met the Moldovian-born Andrei on a trip to Dublin and they connected immediately. It wasn't long before they were tying the knot. But are Elizabeth and Andrei still together? 90 Day Fiancé: Happily Ever After? revisits their story every Sunday on TLC.

Elizabeth and Andrei are still going strong. Their courtship may have been quick, but they've made it work so far. They were married in December 2017 (which 90 Day fans will remember from the bachelorette drama that ensued), then announced that they were expecting less than a year later in October 2018. In an interview with Cosmopolitan, Elizabeth revealed that they were on a road trip through Florida when she realized she was pregnant. She had no appetite and felt "really foggy-headed and weird," which was a big tipoff. Soon, a pregnancy test confirmed that she was having a baby.

"It was a total surprise," Andrei said. "We didn't plan it." Though they were happy to add another member to the family, there were some concerns about telling Elizabeth's dad the news. He wasn't exactly Andrei's biggest fan, but luckily he rallied to welcome his new grandchild. He attended their gender reveal party, too, where everyone found out that Elizabeth and Andrei were having a daughter.

"Everyone was screaming," Elizabeth told Cosmopolitan. "Most of my family counted on it being a girl, and everybody was right. We just kind of had this gut feeling." Their daughter Eleanor Louise Castravet was born on Jan. 23, 2019, according to a statement the happy couple released to E! News. They felt blessed to have Eleanor in their lives, calling her birth a "joyful and amazing moment for us." They thanked their fans for their support and expressed excitement over the future of their family.

They shared some of their plans while speaking to E! News, too. They were still waiting on Andrei's permanent resident approval, but as soon as that came through, they wanted to visit his family in Moldova. They were planning on having a Moldavian wedding to complement their Floridian one. Maybe Eleanor can even be the flower girl, depending on when the wedding happens. She probably doesn't have great petal-tossing skills right now, but give her a couple more months and she'll be a pro.

If you follow Elizabeth or Andrei on Instagram, then you've probably already seen the countless adorable photos they've both posted of Eleanor. They snapped pictures of her first Easter and Mother's Day, as well as some cozy family cuddles and very impressive hair bows. Elizabeth and Andrei also indulge in plenty of heartwarming couple photos. They seem to be one 90 Day Fiancé pair who have settled happily into married life together. There may be some disagreements along the way — even Eleanor's arrival hasn't been able to totally smooth things over with Elizabeth's dad — but these two are working through them together.