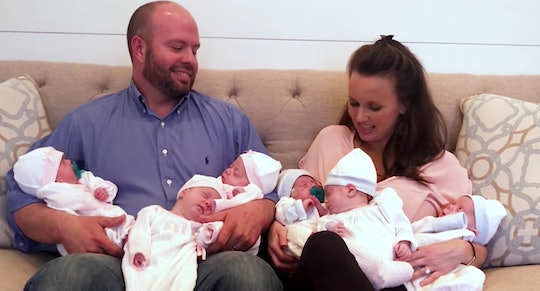 TLC's newest show about one very large family, Sweet Home Sextuplets, is proving itself to be very entertaining. The show, which premiered earlier this week, follows along with the journey of parents Eric and Courtney Waldrop — the parents to three boys, in addition to the sextuplets they welcomed in to the world earlier this year. Now that people are definitely going to become addicted to the show, new fans must be wondering — are Eric and Courtney Waldrop on social media?

Although the first season of Sweet Home Sextuplets just started, it's understandable why fans would want to follow the Waldrop family on social media. Sometimes, it seems as if reality TV shows never capture the full picture of a family — which is where social media comes in handy. These accounts do a great job at allowing fans to get to know their favorite TV stars a little bit better. And since it seems like the Waldrop family kind of appeared out of nowhere, fans should want to look at their social media to get to know all of the family members a bit more.

The great news is, Eric and Courtney are on social media — but they don't have their own individual, public accounts. Instead they share one Instagram account, @gods_divine_nine, where they have amassed over 17 million followers who are curious to know more about their story.

But fans of the couple won't find anything too personal about the Waldrop family on their Instagram account — instead, they'll find family photos and a lot of pictures of the sextuplets. But they won't find anything too revealing about the couple and their life before sextuplets — the first posts from the account are from March of this year. Although the sextuplets were born in December 2017, according to TLC, they weren't able to go home until March 2018, according to People. So it makes sense why the couple would wait to post until then.

Following the account on Instagram is a great way for fans to see how far the sextuplets have come and how much they've grown (and will continue to grow). Just look at this super adorable throwback photo of the girls — Rayne, Rawlings, and Rivers. Along with the boys — Tag, Layke, and Blu — at four months old.

Who wouldn't want to see this in their Instagram feed?

In addition to posting photos of the sextuplets, the Waldrops also post full family photos, with sons Saylor, Wales, and Bridge, on their Instagram account, highlighting just how many people are in their family.

The Facebook page is a little more personal than their Instagram account. Not only do the Waldrops post a lot of photos of their sextuplets and family, they also post throwbacks, as well as some more casual shots. Their Facebook page does a great job at providing a personal look at the family and some super fun shots that aren't on Instagram.

It is unclear if the Waldrops have personal social media accounts — and if they do, it's understandable if they want to keep some privacy, only choosing to share things with friends and family, rather than the whole entire world.

Eric told TODAY that they wanted to document their lives on reality TV to share their personal sense of faith and gratitude with the world. Eric said:

We didn't go into this wanting to be — I don't even know the word — celebrities. We wanted to show the world what God has done for us, and how we've been blessed by this situation. We want to show America how good God has been to us.

And people can definitely see that reflected online.

Bottom line? If fans want to see more of the Waldrop sextuplets and get to know their family more, then following them on both Instagram and Facebook is clearly the way to go.