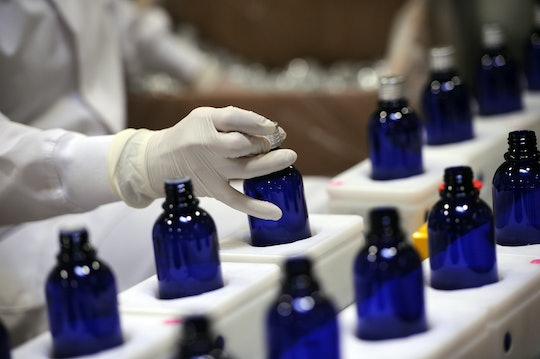 Are Essential Oils Safe For Kids? They Can Be Dangerous In Large Quantities

Parents with active Facebook or Pinterest accounts have likely come across at least one post or article raving about the benefits of essential oils. While I always personally thought essential oils were just used for things like air fresheners, or adding scent to perfumes and cosmetics, these days it turns out that medicinal uses for essential oils are having a huge resurgence, as more and more parents are looking for "traditional" and "natural" alternatives to common ailments. Are essential oils safe for kids? The general consensus in the medical community seems to be that parents should be cautious and use oils only as directed, since, like anything else, essential oils can be extremely harmful when misused.

According to HealthDay News, a report from a Tennessee poison center found that the number of cases involving toxic exposure to essential oils doubled between 2011 and 2015, and that 80 percent of those cases involved children. In many cases, children became ill after ingesting the oils and accidentally aspirating them into the lungs, causing pneumonia, or after "excessive or inappropriate application" of essential oil was applied to the skin.

Does that mean that essential oils are bad? According to Dr. Justin Loden, a certified specialist at Vanderbilt University Medical Center's Tennessee Poison Center, "the rule of thumb in toxicology is 'the dose makes the poison,' so all essential oils are potentially harmful [if used incorrectly]."

In other words, according to the National Capital Poison Control center, any cosmetics, scents or medicines containing essential oils should be used only according to the directions explicitly listed on the label. And if you have any bottles of straight essential oil lying around, you may want to consider throwing them away completely, or, at the very least, making sure they are kept locked away and out of sight. After all, although essential oils seem safe and natural, even small doses of popular oils can cause illness.

Wintergreen, for example, is commonly used in topical pain relievers, as well as a food flavoring (like in mint gum). But according the National Capital Poison Control, "swallowing oil of wintergreen is like swallowing a large number of adult aspirin." Eucalyptus is a common ingredient in products designed to ease cough and cold symptoms, but when swallowed, eucalyptus can cause seizures. And according to pediatrician Dr. Roy Benaroch, lavender and tee tree oil — two very common and popular essential oils — don't even have to be ingested to be harmful: when applied to the skin in larger doses, they can have an estrogen-like effects, in some cases causing breast growth in boys.

But even if you've never planned to use essential oils on your children, it's still possible that the use of oils in products like air fresheners could be problematic. According to Fox 13 News, daycare workers in Idaho became worried about a possible carbon monoxide leak after a number of toddlers woke from their naps lethargic, with extremely dilated pupils (some adults were also experiencing headaches and nausea). But fire officials discovered that the cause of the symptoms was actually essential oils that were being diffused in the daycare center while the children slept. Daycare manager Robin Hagaman told the news station,

We’ve got some essential oils to kind of help with the different smells in the room of toddlers and to help with the viruses that are going around and stuff. We had it up here on top of the little shelf and it was going pretty steady.

After the scare, it was determined that the diffuser contained a potent level of oils, and that the main ingredient, cinnamon, was likely leading to the onset of symptoms.

So what should parents keep in mind when using essential oils, especially directly on their children? According to pediatrician Dr. Chad Hayes, when used as directed (that is, not ingested, or applied in large doses to the skin), essential oils are probably safe — so long as they are not being used in place of actual medical treatment for illnesses. In that case, it's time to call the doctor. And if your child has any reaction or unusual symptoms after using essential oils (or if your child gets into them accidentally), call poison control immediately, or head to your nearest emergency department.