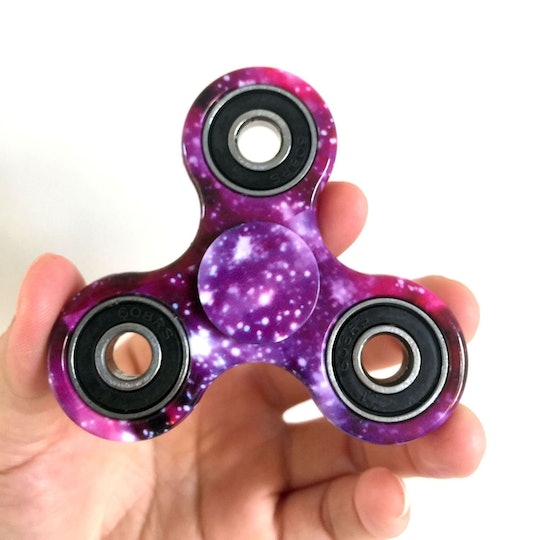 Are Fidget Spinners Safe For Kids Under 5?

When I was a kid, the biggest fad I remember was Garbage Pail Kids, and boy did I love them. But the memorable fad from this generation of children will likely be a little different — fidget spinners. They're everywhere, and every kid wants one. I've seen plenty of older kids playing with them, but many parents wonder if they're suitable for tinier fingers. Are fidget spinners safe for kids under 5?

Every parent wants to give their kids the world, and at about $5, a fidget spinner is an affordable toy to make them happy. But it's important for parents of younger children, like those under the age of 5, to know what toys are safe and suitable.

Fidget spinners may look safe, but they aren't meant for young kids. Many fidget spinners, like the ones sold at Learning Express, are labeled to be suitable for children ages 6 and up, and unsafe for children under the age of 3 due to the choking hazard caused by small parts.

A lot of fidget spinner sellers seem to have a range of age suggestions, including some that recommend their product for babies as young as 1 month to other sellers that recommend it for kids ages 8 and up. More reputable sellers would likely care about safety warnings and make sure they add the choking hazard warnings to their labels. On Amazon, the D-JOY Tri-Spinner ($4) specifically noted that its product should only be used for kids ages 6 and up.

Young children like to put things in their mouth, and if a fidget spinner comes apart, the small pieces could easily become a choking hazard, as it did with a Georgia family. According to WSB-TV 2 Atlanta, a 3-year-old boy was playing with a fidget spinner while riding with his mom in the back seat of their car, when the spinner came apart, leaving tiny parts in his hand, including a small, light-up battery. The news report noted that the boy's mother and grandmother warned about the safety hazard on social media, only to find similar experiences from other families.

As much as your young child may want one, it's best to be safe, and avoid fidget spinners for children under the age of 5. Some of their labels indicate they aren't made for little ones, and have no safety provisions for small children. Better to be safe than sorry when it comes to your kids and the latest toy fad. (There will be a new obsession soon anyway.)