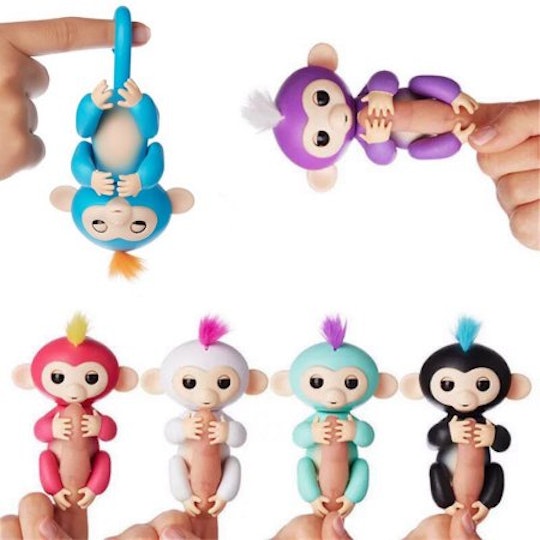 Are Fingerlings Sold Out? Here's Where You Can Get Them

Last year, the toy on every kid's holiday wish list was the ever-elusive Hatchimal. If parents were lucky enough to get their hands on one, they basically won Christmas. For the 2017 holiday season, tiny robotic monkeys called Fingerlings are predicated to steal the show — but are Fingerlings sold out already?

These brightly-colored pets may be the size of your palm, but soon they'll be wrapped around your kids' little fingers. Both literally and figuratively.

If you've never heard of them, here's the lowdown. Manufactured by WowWee, Fingerlings currently come in six different options — Bella, Boris, Finn, Mia, Sophie, and Zoe — and they're going for $15 and up apiece. These adorable monkeys can make more than 40 different sounds, and you can allow them to cling to your finger (thus, their clever name,) the side of a notebook, or even a marker or highlighter.

They may have only been released last month, but Fingerlings are already predicted to be big sellers this year; they've even shot to the top of holiday toy lists at Walmart and Amazon. Plus, they've managed to make both the Toys "R" Us' Hot Toy List and Geoffrey's Top 20, holy moly.

If you're like me and need to see for yourself what all the hype's about, take a look at Fingerlings in action.

So what can you do with these precious baby monkeys? Well, it turns out there are many different ways they can interact with your children. Fingerlings have two sensors on the tops of their heads, and tapping either once or two can elicit a variety of reactions. Tip them upside down, and they're likely to laugh up a storm. Stroke them, and they'll begin cooing and giving happy eye blinks.

If you blow kisses at your baby monkey, it will respond with smooching sounds or sneezing sounds. Another fun trick: If you clap your hands twice, they will all start to sing. Did I mention they also burp and fart? I'm sure somehow this is cute, too.

Kids can also rock them tenderly to sleep because, of course, Fingerlings need their rest after all that monkey business. Children are sure to delight at all of the sleepy sounds they make as their little buddies are catching some Z's.

Ah, the craze of Hatchimals (and now Fingerlings) takes me back to when the original Furby was all the rage. I remember being so excited on Christmas morning when I unwrapped my very own Furby with calico fur. Looking back now as an adult, these gremlin-like toys were borderline creepy and incredibly annoying. But how cool was it that you could care for this furry little creature while it gradually learned to speak English? (You know, until it scared the crap out of you in the middle of the night when it randomly awakened and starting jabbering to you.) I have a feeling kid me would love Fingerlings, too.

So far, my kids haven't discovered that Fingerlings are a thing. But I'm sure it's only a matter of time before ads are plastered all over our TV. Then I'll get to listen to a chorus of, "Mommy, I want that!" every single time.

As of today, it looks like you can buy Fingerlings on Walmart, Amazon, Target and Toys "R" Us. But you can bet as it inches closer to Black Friday, these babies will become impossible to find. So unless you're planning on waiting in line at 2 a.m. when it's 30 degrees outside, I'd suggest you snatch up some Fingerlings well in advance. The sooner the better.

And hey, if you really want to win Christmas this year, try snagging Gigi the unicorn exclusively at Toys "R" Us. May the odds be ever in your favor.

Correction: A previous version of this article stated that the unicorn Fingerling's name is Rosie. Her name is actually Gigi. Romper regrets the error.