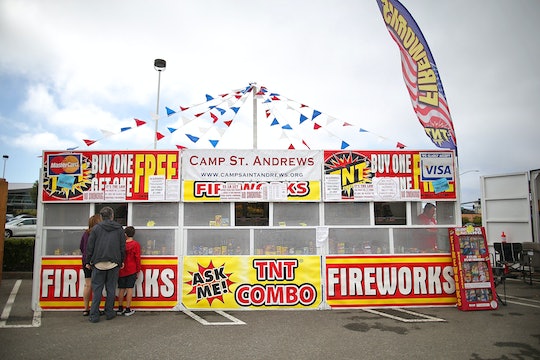 If You're Hoping To Light Fireworks In California This Year, Here's What You Need To Know

I've never been a big fan of fireworks; even sparklers make me a little nervous. But some people get really into whatever holiday allows them to set things on fire and watch them light up the sky. However, it's important to know whether you're allowed to light up the particular sky you're sitting under before you strike a match. If you're living on the west coast, you might be wondering to yourself, are fireworks legal in California?

If a firework is marked "safe and sane," you are allowed to be in possession of it and set it off yourself. Criminal Defense Lawyer explained that only those fireworks marked with that specific label are OK for regular citizens to use on the Fourth of July or any other holiday worthy of fireworks. The site also explained that according to California state law, the state lists a whole bunch of fireworks as "dangerous" and are therefore not safe or sane. Those that "contain arsenic sulfide, arsenates, or arsenites, boron, chlorates, gallates or gallic acid, magnesium, mercury salts, phosphorous, picrates or picric acid, thiocyanates, titanium, or zirconium" are not OK for regular citizens to possess. Likewise, roman candles, chasers and torpedoes are also not allowed.

Even if some California residents are allowed to light fireworks, that doesn't mean they're permitted to buy them just any old time of the year. You can buy fireworks marked with the "safe and sane" emblem from "noon June 28 through noon July 6 every year, unless a local ordinance is adopted and is more restrictive, according to the California Department of Forestry and Fire Protection," reported KPCC.

If you're really hoping to set off some "dangerous" fireworks this holiday (i.e. the epic show-stopping ones that really light up the sky during special events), you'd better have a special display license. The Shouse California Law Group said, "These licenses are typically issued only to pyrotechnic operators who put on Fourth of July and other holiday displays," so you'll probably need to start getting ready for next year instead.

And if you're thinking you'll just buck the law and hope you get away with it, think again. If you're caught using illegal fireworks in California, you could be saddled with a misdemeanor charge and a $1,000 fine, along with a year in jail. That's if you're lucky. If you're caught with quite a lot of dangerous fireworks, you could end up in federal prison for three years and have to pay off a $50,000 fine, explained the Shouse California Law Group.

If you think your neighbors are setting off illegal fireworks, there's an app for that. It's called "Nail 'em" and it's available for iPhone or Android. You install the app and can report someone for using, selling or possessing an illegal firework. According to the app's website, Nail 'em allows you to "easily report the possession, sale and/or use of illegal fireworks in your community along with photos and GPS location." Your report is then sent to the relevant law enforcement or fire personnel, and you can even opt in to receive information about when your complaint was acted upon.

Of course, you'll want to use fireworks with care, especially in California, where wild fires have ravaged communities in recent years. Kids Health recommended that kids never come into contact with fireworks, because they are too dangerous. You should also keep a bucket and hose with you at all times, in case you need to put out a fire started by a firework asap.