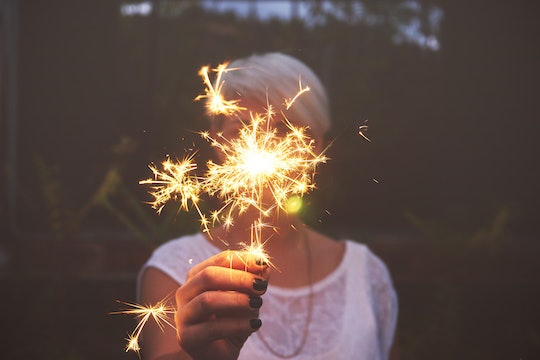 If You're In Chicago, Don't Even Think About Lighting That Sparkler On July 4th

Chicago seems like it would be a great place for setting off fireworks. It's right on the water, and the city's skyline makes it great for photos. If you're going to be in Chicago for the Fourth of July and have a penchant for fireworks, you'll probably find yourself wondering are fireworks legal in Chicago?

Almost all fireworks are outlawed all across Illinois, and even more fireworks are banned from Chicago. Womp, womp. Sargent John Nebl of the Schaumburg Police Department told the Chicago Tribune, "Basically, if it goes 'boom' or 'bang,' it's considered an explosive, and that's a violation." And in fact, even sparklers are banned in the city of Chicago (though the same cannot be said for the rest of the state of Illinois), according to the Tribune.

Like other places, possessing, selling or using illegal fireworks can carry a hefty fine. The fine depends on exactly where you are and how many illegal fireworks you have, but can range from $50 to almost a grand, according to the Chicago Tribune. The power behind the firework can also dictate the fine. For example, "possessing a firework with more than one-fourth of an ounce of an explosive mixture in it qualifies as a felony," reported the Chicago Loopster, a publication of Northwestern University.

So is anything legal to set off for the Fourth of July in Chicago? The Chicago Loopster website had the scoop: "According to state and city legislation, only smoke bombs, party poppers and other novelty items that contain very low levels of or no explosive material are available to the general public." But even sparklers still aren't allowed, even though they don't make any noise and have no explosive material.

Illinois Policy explained that the state is " one of only seven in the country that doesn’t allow the purchase of consumer fireworks." The organization argues that Illinois is actually missing out on the opportunity to create jobs and revenue through legalizing fireworks sales to consumers. "What isn’t so amusing are the parking lots of fireworks stores in Wisconsin, Michigan and Indiana that are filled with Illinois license plates. The money Illinoisans spend there could be used to create jobs and raise tax revenues in the Land of Lincoln," reported Illinois Policy.

But at what cost? Fireworks can definitely be dangerous, causing fires and injuries across the country each year. The National Fire Protection Association (NFPA) reported that "Fireworks start an average of 18,500 fires per year, including 1,300 structure fires, 300 vehicle fires, and 16,900 outside and other fires. These fires caused an average of three deaths, 40 civilian injuries, and an average of $43 million in direct property damage." Those are no small numbers for something that's meant to be set off in celebration.

The NFPA also included a terrifying piece of information in a firework safety flier: sparklers actually burn at 1200 degrees Fahrenheit. That's approximately 1000 degrees hotter than boiling water and very scary when you consider just how many kids hold them each year. They said, "Sparklers even burn hot enough to cause third-degree burns." Not a risk I'd like to take with my kid this year in the name of patriotic celebrations!

Almost a quarter of injuries caused by fireworks are inflicted on children ages 9 and under, and sparklers alone account for a quarter of emergency room visits, according to the NFPA.

If you're looking for a fireworks fix this Fourth of July, your better bet is to seek out a public firework display by a licensed operator, said the NFPA. You'll certainly be less likely to end up in the hospital.