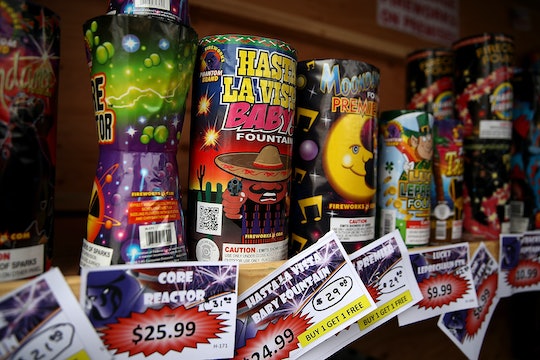 Are Fireworks Legal In Connecticut? Don't Buy Any Bottle Rockets Yet

With the fourth of July fast approaching, Americans everywhere might consider lighting up some fireworks for a backyard celebration. However, not all states permit these minor explosives. For instance, are fireworks legal in Connecticut? People in the Constitution State might be better off watching some bottle rocket vids on YouTube, because the laws forbidding fireworks are pretty strict.

At this time, almost all fireworks are illegal in the state of Connecticut, according to the Connecticut State Police Department of Public Safety. Only sparklers and non-aerial fountains that contain less than 100 grams of pyrotechnic mixture for each individual item are allowed. Plus, they may only be used by people aged 16 and up, as further noted by the DPS. Anything else is considered illegal for private use in the state of Connecticut. This means bottle rockets, party poppers, smoke bombs, and those weird ones that make an ash snake are all forbidden.

Earlier in the year, a bill permitting the sale of firecrackers, bottle rockets, and other consumer fireworks in Connecticut was briefly entertained. But the legislature's judiciary committee did not take up the bill, so the additional sale of fireworks in Connecticut did not come to pass, as reported by WFSB. "It clearly was having a lot of folks stepping up in opposition, and that seemed to be ramping up as the days went by,” said Republican State Senator John Kissel, as further reported by WFSB. It looks like the potential for additional tax revenue from fireworks sales was not worth the risk of damage to people and property.

Considering the amount of damage fireworks can cause, the state's restrictions are understandable. Across America, an estimated 10,500 people went to U.S. emergency rooms for fireworks related injuries in 2014, as noted by the National Fire Protection Association (NFPA). Burns, lacerations, and fractures were among the most common injuries. Curiously, 28 percent of fireworks related injuries were caused by sparklers in 2014, as explained by the NFPA. It's the highest rate of injury for any type of firework, yet it's one of the two varieties of consumer fireworks allowed in Connecticut.

That said, people in Connecticut are still able to enjoy the colorful explosives by attending one of the state's many public fireworks displays. From June through September, there are plenty of places to watch fireworks in Connecticut, according to the Connecticut Office of Tourism. For instance, BarnumPalooza! in Bridgeport will feature fireworks at Seaside Park on July 1, as noted by the Barnum Festival's website. New Haven will offer Fourth of July fireworks visible from Wilbur Cross High School, whereas the Stafford Motor Speedway will offer an Independence Day Celebration with fireworks on July 6, 2018. These are just a few of the upcoming fireworks shows in the state, so be sure to review the Connecticut Office of Tourism's site for more information about specific events.

To be honest, the big professional displays are more spectacular than backyard fireworks, anyway, and you don't have to worry about disposing of burned-out sparkler sticks afterward. You and your family can enjoy these bright displays safely and often for free. It's the best way to appreciate pyrotechnic explosions without chancing a trip to the emergency room.