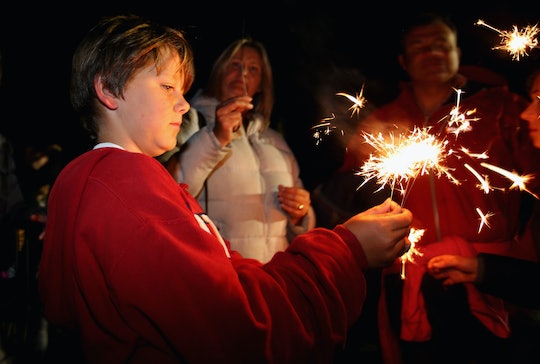 I love fireworks. Growing up in Ohio, there was nothing more fun to me than watching my uncles light off bottle rockets, firecrackers, and various and other sundry explosive devices that could have easily blown any of us to bits. I once went to a barbecue where an emergency room doctor started the bonfire by lighting a chain of roman candles towards a pile of lighter fluid soaked detritus. Good times. Living in New York, you can't go a weekend without hearing firecrackers or M-80s being detonated — it's quite the thing. But are fireworks legal in New York? It seems like they wouldn't bewith everyone being in such close confines.

New York is one of those states where the laws on fireworks vary from municipality to municipality. However, there is one thing that is true for all of the cities and counties in New York State. There is no place where airborne fireworks like Roman candles, bottle rockets, M-80s or firecrackers are legal without a permit, according to the state. There are some counties where you can use what is referred to as a "sparkling device," like hand-held sparklers, snakes, and sparkling fountains, but those vary by county and often change year to year, so it's a good idea to contact your local county authority to determine what is and isn't legal.

And fireworks aren't just illegal to set off. They're also illegal to buy, sell, and bring over state lines. You can rack up some hefty fines, and even jail time according to section 270 of the New York State penal law. You're not just risking blowing up your party, but also your wallet. Not that it deters people in the city and state from using them. In fact, just this past week, I could see fireworks being set off from behind a building just two streets over from my house. I'm not talking little shots that pop and fizzle. Nope, there were actual fireworks being set off behind a bar. Apparently, according to my neighbors, it had something to do with a World Cup game. That is a level of excitement for sports that I will absolutely never understand.

I spoke to my husband, a police officer here in New York City, and asked him if all fireworks are illegal or if you can have some. He tells Romper, "Nothing is legal. Not sparklers, not smoke bombs, not snakes. Nothing is legal. You want to blow something up? Get a permit and file it with the city, otherwise, you're going to get a summons or you'll get arrested." You can apparently also call in a tip about people using fireworks, and if it leads to an arrest, the person who gave the tip could be rewarded a thousand bucks.

The bananas thing is that it is still such a problem, that during certain times of the year, like the upcoming 4th of July holiday, there simply aren't enough officers to go around to take care of the problem. If you're in my neighborhood on this holiday, it's an all-night barrage of kabooms.

The reason they're so restricted is because fireworks are incredibly dangerous. Even the most-benign seeming sparklers — which so many of us played with as kids and buy for our own children — are hotter and scarier than you may think. According to a report in the Chicago Tribune, sparklers are responsible for over 12 percent of all reported fireworks-related injuries, sending hundreds of kids to the emergency department each and every year. On this one, it's better to be safe than sorry and check out the local fireworks in your area, sanctioned by the city you live in. Those are done by skilled pyro-technicians with many, many levels of safety in place for you and your loved ones.