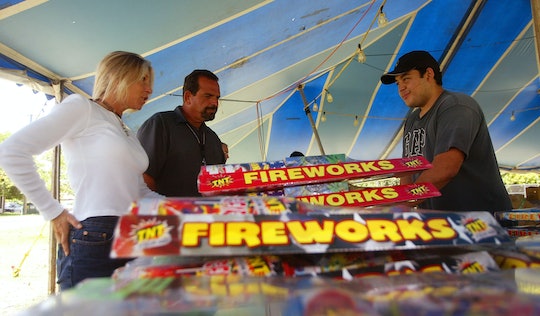 Everything's bigger in Texas, including celebrations. We're rapidly approaching Independence Day, and with it will no doubt be backyard barbecues, raucous parties, and huge fireworks displays set off by all and sundry. But can you get in trouble at your 4th of July festivities for setting off your bottle rockets and lighting your sparklers? Are fireworks legal in Texas?

Holy cow does Texas like to party. And by party, I mean set off explosives for fun. It's a big business in Texas, and fireworks are legal in the state of Texas with some stipulations and provisos that need mentioning. According to Gray-Reed Attorneys at Law, most fireworks are legal, but there are some stipulations. They're only sold at specific times of the year, they cannot be sold to anyone under the age of 16, they can't be set off near a church, school, anything that houses flammable material, and they must meet certain safety requirements. You also can't shoot them on public lands, or at any motor vehicle.

I know that last one is tempting, but there will be no Viking funerals given in the great state of Texas without a permit. But there are plenty fun and legal fireworks available a few weeks a year for purchase at various Texas fireworks emporiums.

My parents live in San Antonio, Texas, and where they live, fireworks are illegal within the city limits, according to AXS. This is repeated in cities like Austin, Houston, Dallas, and Fort Worth. In most cases, however, you only need to leave the city limits to set off your fireworks, and you're perfectly within your legal right, depending on the ordinances of the area you're in.

It's also largely dependent upon the drought levels of any given year in any given region. If there's a ban on burning or open fires, there is usually a corresponding ban on fireworks for obvious reasons. This year is a drought year for much of Texas, but for cities like El Paso, the level of drought isn't yet great enough for the city to place a ban on the holiday tradition, according to The El Paso Times. Although, they do expect revelers to use their common sense. If the area is particularly dry, if there's a great deal of brush, you might want to look elsewhere to shoot off your M-80s or ground spinners. Also check your local paper around the holiday because they will usually have an update on whether or not you're looking at a burn ban.

Are fireworks legal in Texas all year long? According to Fireworks.com, they are, but they're only sold before the New Year and leading up to the 4th of July. It's important to note that throughout the state, all fireworks must meet CPSC and DOT Consumer Fireworks definitions, except for small rockets (less than 4 grams propellant, and casings less than 5/8 of an inch x 3 ½,” and overall length including stick of less than 1.8’). That fits the bill for a surprising number of rockets, judging by what many of the fireworks outlets have for sale on their websites.

Regardless of the legality of the fireworks, it almost goes without saying that fireworks can be extremely dangerous. According to the National Fire Prevention Association, "In 2013, fireworks caused an estimated 15,600 reported fires in the U.S., including 1,400 structure fires, 200 vehicle fires, and 14,000 outside and other fires." As for injuries? The Consumer Products Safety Commission found that "on average, 250 people go to the emergency room every day with fireworks-related injuries in the month around the July 4th holiday." More than 69 percent of these injuries were burns. So while they may be legal, be sure to follow the directions to the letter, do it in a safe area away from children, and please make sure you're sober when you're setting them off. Otherwise, have a good time.